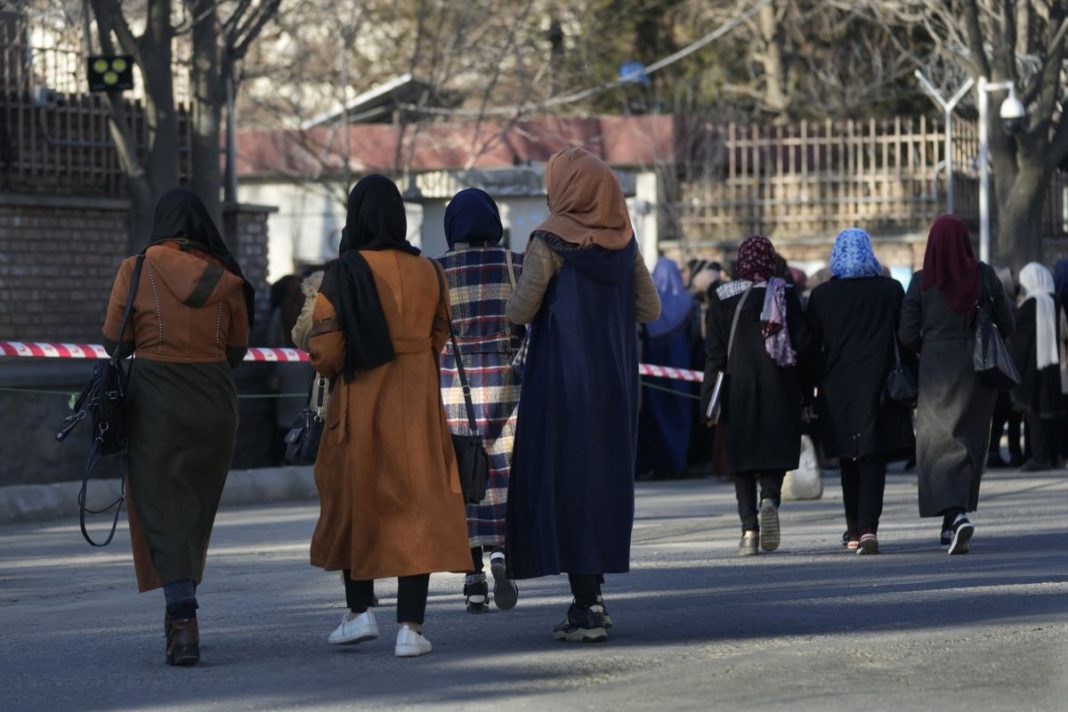 Afghanistan’s Taliban-run administration has ordered all local and foreign nongovernmental organisations (NGOs) to stop female employees from coming to work, according to an economy ministry letter.

The letter, confirmed by economy ministry spokesperson Abdulrahman Habib on Saturday, said the female employees were not allowed to work until further notice because some had not adhered to the administration’s interpretation of the Islamic dress code for women.

The letter added any NGO found not complying with the order would have their operating licence revoked in Afghanistan.

The order came days after the Taliban-run administration ordered universities to close to women, prompting strong global condemnation and sparking some protests and heavy criticism inside Afghanistan.

It was not immediately clear how the order would affect United Nations agencies, which have a large presence in Afghanistan delivering services amid the country’s humanitarian crisis.

When asked whether the rules included UN agencies, Habib stated the letter applied to organisations under Afghanistan’s coordinating body for humanitarian organisations, known as ACBAR.

That body does not include the UN but does include more than 180 local and international NGOs.

However, the UN often contracts with NGOs registered in Afghanistan to carry out its humanitarian work. Ramiz Alakbarov, the UN deputy special representative for Afghanistan and humanitarian coordinator, noted he was “deeply concerned” by reports of the letter, which was a “clear breach of humanitarian principles”.

He told the Reuters news agency that contracted NGOs carried out most of the UN’s activities and that their work would be heavily impacted.

“Many of our programmes will be affected,” he added, because they need female staff to assess humanitarian needs and identify beneficiaries, otherwise they will not be able to implement aid programmes.

The potential endangerment of aid programmes that millions of Afghans access comes when more than half the population relies on humanitarian aid, according to aid agencies, and during the mountainous nation’s coldest season.

“There’s never a right time for anything like this … but this particular time is very unfortunate because during winter time people are most in need and Afghan winters are very harsh,” said Alakbarov.

He added his office would consult with NGOs and UN agencies on Sunday and seek to meet with Taliban authorities for an explanation.

International aid agency AfghanAid announced it was immediately suspending operations while it consulted with other organisations, and that other NGOs were taking similar actions.

The ban drew condemnation from the United States and donor groups.

US Secretary of State Antony Blinken said on Twitter he was “deeply concerned” the move “will disrupt vital and life-saving assistance to millions”.

“Women are central to humanitarian operations around the world. This decision could be devastating for the Afghan people,” he added.

The United Nations announced that the Taliban’s controversial decision to impose an indefinite ban on female staff working at local and international NGOs in Afghanistan will hamper humanitarian operations, calling for a meeting with Taliban leadership to seek clarity.

In a statement, UN’s spokesman Stephane Dujarric noted that Secretary General Antonio Guterres was “deeply disturbed by the reported order of the de facto Taliban authorities” and that the UN chief “reiterates the rights of all women to participate in the workforce thus contributing to the greater good.”

In a separate statement, the UN humanitarian coordination office in Afghanistan condemned the latest round of restrictions on women’s rights and emphasized that any such order by the authorities “would violate the most fundamental rights of women, as well as be a clear breach of humanitarian principles.”

“Women must be enabled to play a critical role in all aspects of life, including the humanitarian response,” the statement said, adding that, “This latest decision will only further hurt those most vulnerable, especially women and girls.”

The statement went on to note that the UN and its partners, including national and international NGOs, are helping more than 28 million Afghans who depend on humanitarian aid to survive.

“The effective delivery of humanitarian assistance requires full, safe and unhindered access for all aid workers, including women. The reported ban on women working with the international community to save lives and livelihoods in Afghanistan will cause further untold hardship on the people of Afghanistan,” the statement concluded.

The European Union has also said it was assessing the effect on its aid in the country.

“The European Union strongly condemns the Taliban’s recent decision to ban women from working in national and international NGOs,” a spokeswoman for EU foreign policy chief Josep Borrell told the AFP news agency in a statement.

There has been widespread international condemnation of the university ban, including from Muslim-majority countries such as Saudi Arabia, Turkey, the United Arab Emirates and Qatar, as well as warnings from the US and the G7 group of major industrial nations that the policy will have consequences for the Taliban.

Despite initially promising a more moderate rule respecting rights for women and minorities, the Taliban has widely implemented its interpretation of Islamic law since it seized power in August 2021. It has also restricted women from most fields of employment, ordered them to wear head-to-toe clothing in public, and banned them from parks and gyms.