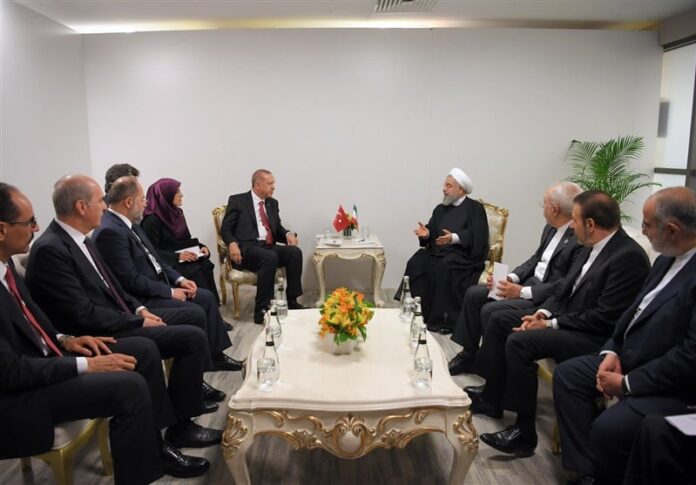 Visiting Iranian President Hassan Rouhani highlighted the importance of Tehran-Ankara relations and said the development of cooperation between the two neighboring countries is to the benefit of both nations and strengthens regional stability.

Speaking at a meeting with his Turkish counterpart, Recep Tayyip Erdogan, late on Friday, President Rouhani praised bilateral relations between the two countries in various economic, cultural and political fields as “amicable and brotherly”.

He further emphasized that the closer banking cooperation between the Islamic Republic and Turkey would enable the two countries to take the best advantage of trade potentials.

“The development of Tehran-Ankara relations and consultations  is beneficial to both nations and contributes to the strengthening of stability and security in the region,” Rouhani noted.

Erdogan, for his part, hailed the close ties between Iran and Turkey and said the two countries’ officials have made very good attempts to boost relations and cooperation and these efforts should continue.

President Rouhani was in Istanbul on Friday to take part in an emergency summit of the Organization of Islamic Cooperation (OIC) about recent massacre of Palestinians.

On Monday, tens of thousands of Palestinians rallied near Israel’s border fence to protest a blockade of their territory and the move of the US embassy from Tel Aviv to al-Quds (Jerusalem) that day.

The Gaza Health Ministry said nearly 60 Palestinians were killed and more than 2,700 others injured, including 1,360 by live fire. Of the wounded, 130 are in serious or critical condition.

US President Donald Trump announced on December 6 that his administration would begin the process of moving the American embassy in Tel Aviv to Quds.

After months of global outcry, the US opened its embassy in al-Quds in a ceremony attended by a White House delegation and Israeli regime officials on Monday.