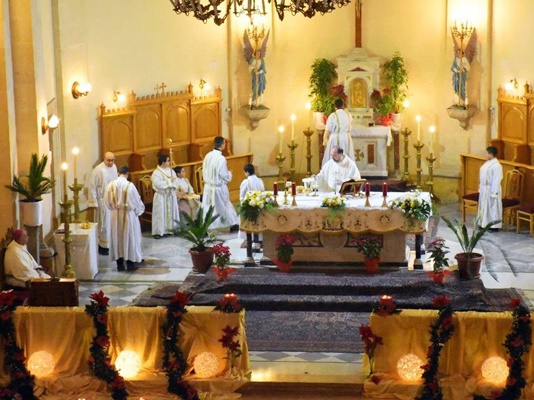 Christians in Syria’s Aleppo celebrated under a giant Christmas tree lit up for the first time in five years, hailing what many described as the return of peace to a city that came back under full government control last week.

According to a report by IFP, the fall of rebel-held east Aleppo was the biggest victory of Syria’s nearly six-year-old war, and many in the city have been jubilant.

In the war ravaged St. Elias Cathedral located on what was long the frontline in Aleppo’s historic Old City, priests prayed for peace at the first Christmas Eve Mass for five years, attended by dozens of worshippers, including some Russian officers.

He said the numbers attending mass across the city had surged, now that worshippers no longer feared missiles from militant-held areas.

Many Syrian Christians supported the government in the civil war, viewing Assad as a protector against radical militants.

In the comparatively undamaged parts of the city that had long been held by the government, restaurants were thronged by Christians late into the night.

Hundreds of people danced and celebrated in the Azizya neighbourhood, where the public Christmas tree had gone unlit since militants took the eastern half of the city in 2012. Giant posters depicted Assad and his Christian ally, Russian President Vladimir Putin.

In live footage shown on state television, a woman identified as the mother of slain Syrian soldier carried her son’s picture alongside an image of the Virgin Mary.

“I am sure his soul is in peace now because Aleppo has been liberated,” she said, as reported by Retuers.

Although some Christians stayed on the sidelines of the civil war, many saw the rise of ISIS and other insurgent groups as a threat to the very existence of their communities, some as old as the bible. The Christian population of Aleppo has shrunk since the start of the conflict to around 50,000 from 250,000 according to Bakhash.