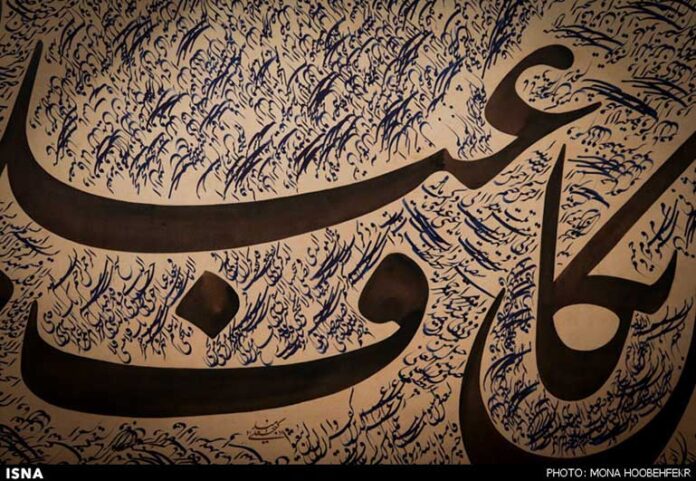 The exhibition, which opened at Niavaran Cultural Center on August 16, will run through August 25.

Traditional Iranian arts would be sponsored by royal funds and kept along with precious jewelry in royal treasuries. In this day and age, however, artworks need spiritual support and more publicity, Ahmad Masjed Jamei, a Tehran City Council member, said at the opening ceremony of a calligraphy and textile printing exhibition in the capital.

Rafi Razavi, an organizer of the exhibition at Niavaran Cultural Center, said, “The 36 works of art on display at the expo depict an integration of calligraphy and textile printing. The collection is the result of efforts of seven artists during a 32-month period. ”

He further said calligraphers Omid Ganjali and Mohsen Soleimani have cooperated with a team of professional textile printing artists to craft the artworks on display.

He added, “Istanbul [where the collection was previously on display] was a great experience. Although, Istanbul is a global calligraphy hub, Turkish calligraphers were impressed by Iranian calligraphy and the thick pens used by Iranian artists.”

Razavi said the exhibition is scheduled to be held in the United Arab Emirates in late October.

Images of the Tehran calligraphy and textile printing exhibition released by the Iranian Students’ News Agency: