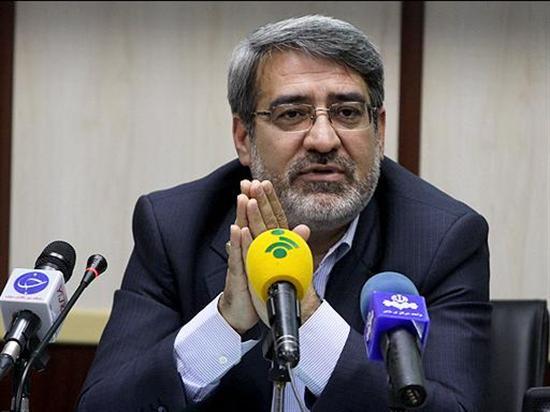 Interior Minister of Iran Abdolreza Rahmani Fazli on Monday said that it is policy of the government of Islamic Republic of Iran to strengthen ties with neighbors including Pakistan.

Talking to IRNA here, the minister said that Iran and Pakistan share the same religion, culture and history. “We consider Pakistan as our close friend and brother,” he said.

He added that it is the policy of Iran to further boost its cooperation with Pakistan. He; however, said that Iran and Pakistan should carry out joint activities to strengthen bilateral relationship.

He strongly believed that Iran-Pakistan strong relationship will bring peace and stability in the region. Abdolreza Rahmani Fazli said that Iran is making all out efforts to further improve its ties with Pakistan.

Talking to reporters, the Interior Minister of Iran said that there is absolutely no tension between Iran and Pakistan at borders.

He added that Iran and Pakistan are having strong cooperation in all sectors. He noted that after approval of a bill by Iranian parliament for enhanced cooperation with Pakistan, both countries would be able to effectively fight terrorism and stop human and drug trafficking.

“My visit is being carried out at the invitation of my Pakistani counterpart,” he said. He said that during the visit, he will discuss issues concerning mutual relations.

He said that it is our objective to implement security agreement between Iran and Pakistan as early as possible.

Replying to a question regarding foreign interference in the region, he said that ‘we have evidence that foreign elements that are interfering at Iran-Pakistan border and supporting the terrorists.’

The minister was hopeful that Iran, Pakistan and Afghanistan, with their joint cooperation, would defeat all conspiracies against them.

Abdolreza Rahmani Fazli giving his views, that it is the policy of Iranian government to develop country’s border regions.

Speaking to IRNA, Pakistan’s Acting Interior Secretary, Imtiaz Tajwar, said that ‘Iran and Pakistan are like two brothers and the two brothers are doing everything for the better security and better friendship.’