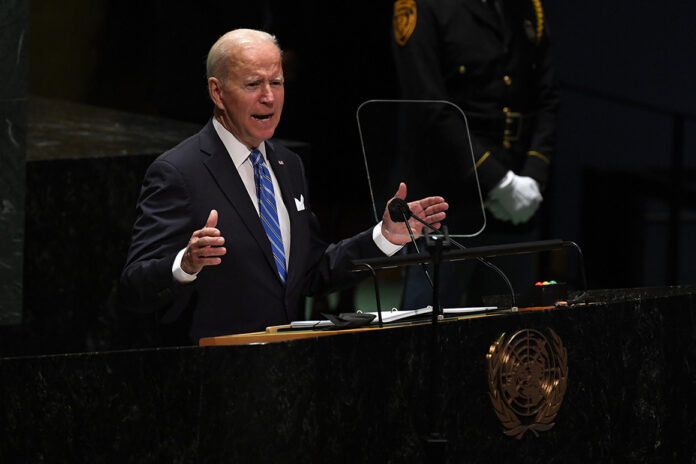 U.S. President Joe Biden told the United Nations General Assembly (UNGA) on Tuesday that Washington would come back to the Iranian nuclear deal in “full” if Tehran does the same.

He said the U.S. was “working” with China, France, Russia, Britain and Germany to “engage Iran diplomatically and to seek a return to” the Joint Comprehensive Plan of Action (JCPAO), officially known as Iran’s Nuclear Deal.

Iran’s Supreme Leader Ayatollah Seyed Ali Khamenei has said the United States must be first to return to its commitments under the nuclear deal.

Germany, France and the United Kingdom – the three European powers that signed the nuclear deal along with the U.S. – also no longer have the right to set conditions since they reneged on their commitments first, he added.

The supreme leader stressed that Iran has set its conditions for the deal, which it will not go back from.

“If they want Iran to return to its JCPOA commitments, the U.S. must completely lift sanctions. And not just verbally on the paper. They must revoke the sanctions in action and we will verify it,” he stated.

Biden also used his first address before the U.N. General Assembly to summon allies to move more quickly to address the festering issues of the COVID-19 pandemic, climate change and human rights abuses, while insisting the U.S. is not seeking “a new Cold War” with China.

The president said the halting of U.S. military operations in Afghanistan last month, ending America’s longest war, set the table for his administration to shift U.S. attention to intensive diplomacy at a moment with no shortage of crises facing the globe.

Biden defended his decision to end the U.S. war in Afghanistan, a chaotic withdrawal of American troops that frustrated some allies and hurt his standing at home. He called for the world to make the use of force “our tool of last resort, not our first” going forward.

“Today, many of our greatest concerns cannot be solved or even addressed by the force of arms,” he stated, noting, “Bombs and bullets cannot defend against COVID-19 or its future variants.”

“To deliver for our own people, we must also engage deeply with the rest of the world,” he added.

“We’re opening a new era of relentless diplomacy, of using the power of our development aid to invest in new ways of lifting people up around the world,” he continued.

Biden sought to play down concerns about China tensions escalating into something more, stressing, “We are not seeking a new Cold War or a world divided into rigid blocs”, addressing recent criticism by UN Chief Antonio Guterres, who warned the United States to repair their “completely dysfunctional” relationship with Beijing before it turns into a Cold War even more dangerous than the last one.

Biden also stressed that the U.S. is seeking the “complete denuclearization of the Korean Peninsula”.