B-52 Bomber Conducts First Anti-Iran Mission in Persian Gulf: US 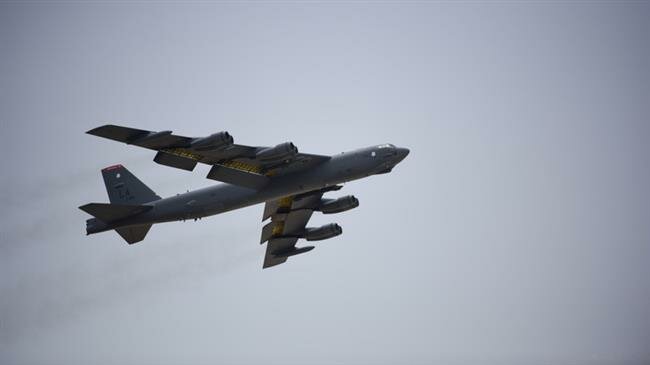 The B-52H Stratofortress bombers, sent to the Middle East amid the United States’ anti-Iran deployment, have carried out their first mission, says the US Air Forces Central Command.

AFCENT said in a brief statement on Monday that the mission was launched from a US base in Qatar Sunday.

“This was the first mission of the Bomber Task Force deployed to U.S. Central Command area of responsibility in order to defend American forces and interests in the region,” read the statement, released along with purported images of the mission.

The announcement came as US officials were stepping up rhetoric against Tehran in the wake of US unilateral pressure.

Islamic Revolution Guards Corps (IRGC) aerospace division General Amir Ali Hajizadeh asserted Sunday that the US forces stationed in the Persian Gulf “will be hit on the head” if they make a mistaken move.

President Donald Trump has, for his part, claimed Iranians “will suffer greatly” if “they do anything” against the US.

An anonymous US official has also been quoted by Reuters throwing baseless accusations against Tehran in the wake of a “sabotage operations” against tankers near the United Arab Emirates.

The official acknowledged that Washington has no conclusive proof  showing that Tehran carried out attacks against the four tankers.

“This is what Iran does … The sort of thing you could see Iran doing … It fits their M.O. (modus operandi),” the official reportedly said on condition of anonymity.

Acting Defense Secretary Patrick Shanahan told reporters Friday that the US was sending a Patriot missile battery and the USS Arlington amphibious transport dock to the region.

“It’s important that Iran understand that an attack on Americans or its interests will be met with an appropriate response,” claimed the Pentagon chief.Tehran has also condemned the Trump administration’s “psychological war” in the wake of his withdrawal from the internationally backed Iran nuclear deal.