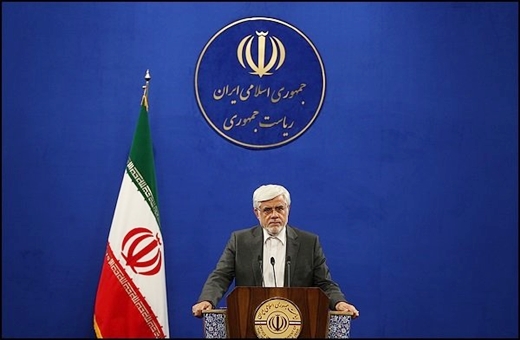 Mohammad Reza Aref, a leading moderate reformer who won the highest number of votes in Tehran in the February 26 parliamentary elections, said on Saturday that he and his colleagues will do their utmost to realize their motto of “Hope, peace, and economic prosperity” in the upcoming Parliament.

A week earlier, Aref said they would speak together through a faction named the “Faction of Hope.”

“Implementing the tenets of resistance economy and addressing social challenges are among our future plans,” the reformist figure said.Elsewhere in his remarks, Aref highlighted that the majority of the Iranian people are against extremism, seeing reformist mechanisms to counter challenges.
Aref secured a landslide victory in the February parliamentary elections in Tehran, beating all his rivals in the city.

The Stanford-educated figure is considered the main competitor for the post of parliament speaker, competing with the incumbent Ali Larijani, who was reelected to parliament from the Qom constituency.

Since his victory in parliamentary elections, Aref, the former first vice president, has insisted on setting an economic agenda for the next Parliament.
Earlier, Aref had said that if his faction succeeds in taking the helm of Parliament, he will make it a priority to respond to the demands of Iranians. Among these demands, he noted, are better economic figures, promotion of living standards, controlling inflation, and creating jobs, he explained.

Aref was on the top of the 30-member candidate list in the Feb elections in the Tehran constituency. He and 29 others on the list captured all the 30 seats allocated for the metropolis of Tehran in the Majlis [Parliament]. They campaigned under the banner of the “List of Hope”.