All religions are there to promote humanity: Zoroastrian priest 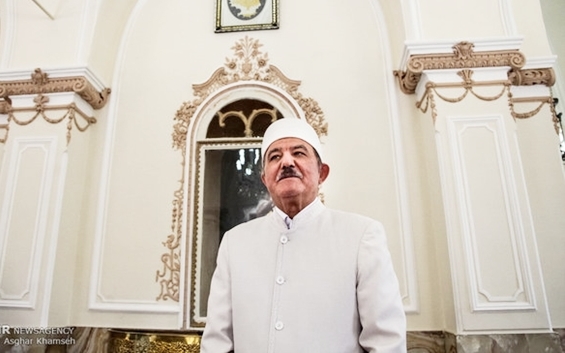 The aim of different religions is monotheism and they do not argue with each other over details, said the Head of Iran's Zoroastrian Mobed Council Ardeshir Khorshidian.

In Mirza Kuchak Khan, a Tehran neighborhood, there is a street which is home to a synagogue, a fire temple and a church. The street is set to be named “Neighborhood of Religions”.

Mehr News Agency has held an interview with the Head of Iran’s Zoroastrian Mobed Council, Ardeshir Khorshidian, to find out what he thinks of the designation.

The following is the translation of part of the interview the agency published earlier in October:

How do different religions coexist in this neighborhood?

When it comes to core principles, there is no difference between different religions. I was invited to a gathering of Dialogue among Religions a few years ago. At the event I said instead of dialogue among religions dialogue among different sects was taking place.

When a religion is put into practice in society, it defines dos and don’ts. In other words, sectarian rules emerge to give shape to Shariat (the code of law) and Tarighat (the approach).

When we conduct studies, we need to distinguish between religion and sects. If we fail to differentiate, we cannot learn about religions.

For instance, IS has one reading of Islam while others interpret it differently. Within Islam, there are different sects; even among Shiite Muslims, there are a number of sects which are different from each other. These are issues about which there will never be an agreement.

However, if dialogue among different religions is held, there will be a lot of common ground. Because the aim of all religions is monotheism and they do not argue with each other over details.

Prophets are not at odds with each other; the late Imam Khomeini said multiple times that prophets don’t have any disagreement with each other, because they are all God’s messengers.

Monotheism is the establishment of unity. To that end, we need to put aside divisions and do not regard marginal matters as core principles. In fact, all religions have the same basis and they are all aimed at promoting humanity and guiding people down the right path; a religion teaches virtues by which humanity can be promoted, but individuals opt for different vehicles to express it.

How can the way for peaceful coexistence in the world be paved?

Power lacks originality, but culture does have originality. We Iranians believe that God is omnipresent and there is divine light in every particle of the world, including within human beings.

Culture is intended to promote unity. The Ministry of Culture should foster the culture of humanity. Ethics is not part of Islam or Zoroastrian; it is for all human beings.

Shiite Muslims prostrate on Karbala soil while Christians revere the Cross. We keep arguing and labeling others as worshipers of soil or fire, but such matters are secondary.

Shiite ideology is an Iranian thinking which succeeded in highlighting the principle of justice. If you take a look at history, you will find out that the Iranians were the first nation who drafted a human rights charter and abolished slavery at a time when the whole world was practicing it.

When you have the power to slap someone across the face, but you exercise self-restraint and decide against it, you can be described as a human being, not when you don’t hit someone because you can’t.

When Cyrus the Great conquered Africa and saw that some humans were being beaten there, he ordered slavery banned.

The US abolished slavery when workforce was replaced with machinery and it could no longer benefit from slavery. Back then, white people were jobless while black people, who would sleep in stables, had jobs. Since white Americans led miserable lives they put pressure on Congress and consequently slavery was abolished.

Ali ibn Abi Talib felt upset if a Jewish woman [living in his caliphate] was slightly annoyed. Such thinking revolves around humanity not human beings who are the core principle of the ideology put forth by the Europeans.

What is the problem of human beings today? When one watches TV, he feels disgusted by the extent of wickedness which is spreading around the world. There is massacre and bloodshed and security is scarce in the world.

God has given human beings the gift to think as well as other blessings, but many won’t exploit them well and fail to lead a humane life. Religions are designed to build human beings and promote humanity. If we are not taught a culture of humanity in the world, each of us will pursue our own interests, we attack each other and everyone thinks others should be like him. Everyone should resort to humanity to reform.

We need to open our eyes, abandon prejudices and put nothing but humanity first. All nations are respected and play a role in the evolution of humanity. Through such vision, we can enjoy seeing different cultures.

What is the difference between us and animals? All elephants are the same, but two human beings are not exactly the same. Isn’t that beautiful? Different views are not a good reason for us to argue with each other unless one intends to trample on the rights of another and that is condemned by all religions.