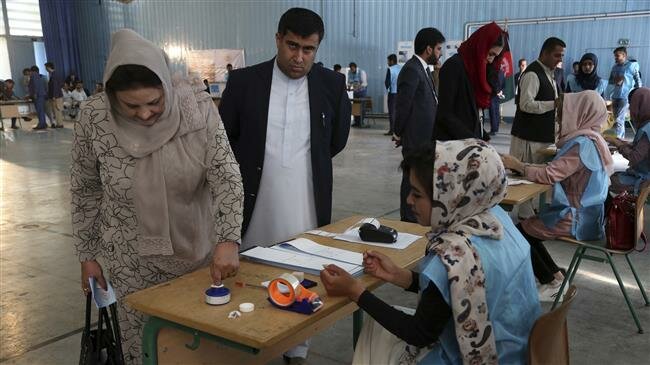 Voting has begun in Afghanistan's presidential election, with over nine million registered voters potentially heading to the polls amid tight security measures.

The polls open on Saturday as 100,000 Afghan forces with air support from US forces, were deployed to protect 5,000 polling centers set up across the country, according to security officials.

“Voting has begun all over the country, and we are glad the people are already in big lines at polling centers waiting to cast their votes,” said Independent Election Commission spokesperson, Zabi Sadaat.

About 9.6 million of Afghanistan’s 34 million people are registered to vote for one of 14 candidates.

Hundreds of polling centers remain closed in areas under Taliban control as well as in schools, mosques and district centers due to security concerns.

They warned teachers, students and other education workers this month to avoid the presidential vote or risk dying in attacks.

It said on Thursday that all major and minor roads would be closed by militants on Saturday. It also said that if casualties arise, all responsibility will lie with “the participants of this American process themselves.”

A bomb went off near a polling station in the southern city of Kandahar just an hour after voters began queuing to cast their ballots.

Fifteen people were injured by the attack, according to a senior provincial government sources. No militant group claimed responsibility for the blast.

Every election in the last decade has been marred by violence in the country.

The Taliban’s five-year rule over at least three quarters of Afghanistan came to an end following the US invasion in 2001, but 18 years on, Washington is seeking a truce with the militants, who still control large swathes of territory.

The election— the fourth since the Taliban were toppled — is taking place after peace talks between the militant group and Washington collapsed earlier this month.

Since October 2018, the Taliban’s Qatar-based political bureau has been engaged in a diplomatic process with the US, but US President, Donald Trump, declared the talks “dead” on September 9, after the militant group carried out a bomb attack in the capital Kabul, which killed 12 people, including an American soldier.

Following the collapse of the talks, the Afghan government issued a statement, saying it is committed to working with Washington to “bring peace.”

The president also said earlier that it is vital to give the government a democratic mandate in future talks with the Taliban.

The government had long been engaging the militant group to come to the negotiating table. The Taliban, however, consider the government to not be legitimate

Kabul now says it will only consider holding talks with the Taliban after the elections.

Responsibility for finding peace now falls with the country’s next president, who will be leading Afghanistan for four years.

The head of a Kabul-based think tank, however, says the Taliban will still question the legitimacy of the government after the vote.