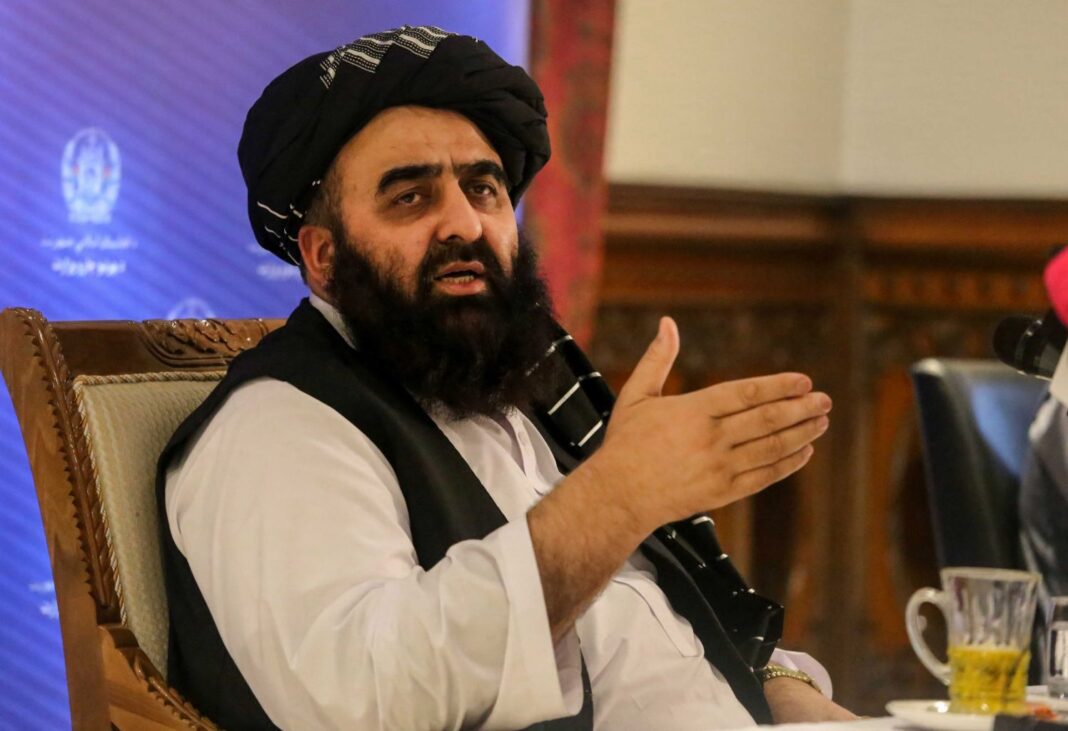 Acting Foreign Minister Amir Khan Muttaqi has criticised the United States for its actions towards the new Taliban government and for severing economic assistance.

In his first address to the media since the Taliban announced its new caretaker government last week, Muttaqi said on Tuesday that the group would not allow “any country” to impose sanctions or embargoes on Afghanistan, including the US.

[We] helped the US until the evacuation of their last person, but unfortunately, the US, instead of thanking us, froze our assets,” he added.

Since the Taliban took control of the Afghan capital, Kabul, on August 15 as former President Ashraf Ghani fled the country, the US Federal Reserve, the International Monetary Fund and the World Bank have cut off Afghanistan’s access to funds, resulting in a widespread liquidity crunch in the cash-dependent economy.

Muttaqi thanked the international community for pledging more than $1bn of aid for Afghanistan at a UN donor conference on Monday.

“We welcome the pledge of emergency aid funding committed to Afghanistan during yesterday’s meeting hosted by the UN in Geneva,” he stated.

No government has yet agreed to formally recognise the Taliban-led administration in Kabul, which could further imperil the Afghan economy, which has been highly dependent on foreign aid for the last 20 years. According to the World Bank, foreign aid makes up some 40 percent of Afghanistan’s gross domestic product.

Muttaqi said the government was willing to work with any country, including the US, but added it will not be “dictated to” by any state.

UN chief Antonio Guterres remarked at the donor conference that it would be “impossible” to provide humanitarian assistance to Afghanistan without engaging with the Taliban.

“I do believe it is very important to engage with the Taliban at the present moment for all aspects that concern the international community,” he noted.

He told ministers that believed aid could be used as leverage with the Taliban to achieve improvements on human rights, amid fears of a return to the brutal rule that characterised the Taliban’s first stint in power from 1996 to 2001.

The European Union’s foreign policy chief Josep Borrell on Tuesday stressed the EU has “no other option but to engage with the Taliban”.

Muttaqi urged countries around the world to open formal relations with the Taliban-led government, citing an end to war in the country.

“Security is being maintained across the country,” he added, and stressed that Afghanistan was open for foreign investment.

Muttaqi also said the government would not allow Afghanistan to be used as a base for armed groups to launch attacks on other countries.

In another assurance to the international community, Muttaqi stated that all Afghans are free to leave the nation if they possess the necessary documentation.

Activists have accused the Taliban of keeping Afghans, including those with proper documentation, from leaving the country during the international evacuation efforts ahead of the August 31 foreign troop withdrawal deadline.

He called reservations expressed by Paris and other capitals, “unfair and unjust”, before restating that the interim government will respect all human rights, including those of women.

However, in recent weeks, the Taliban has come under heavy criticism for its violent crackdown on protests and media outlets covering recent demonstrations in the country.

Despite his criticisms of Washington, whom he accused of destroying Afghan property, including at Kabul’s Hamid Karzai International Airport, Muttaqi expressed the Taliban’s gratitude towards nations including Qatar, Pakistan and Uzbekistan for their delivery of aid to the nation.

He promised to equally distribute aid among the Afghan people.