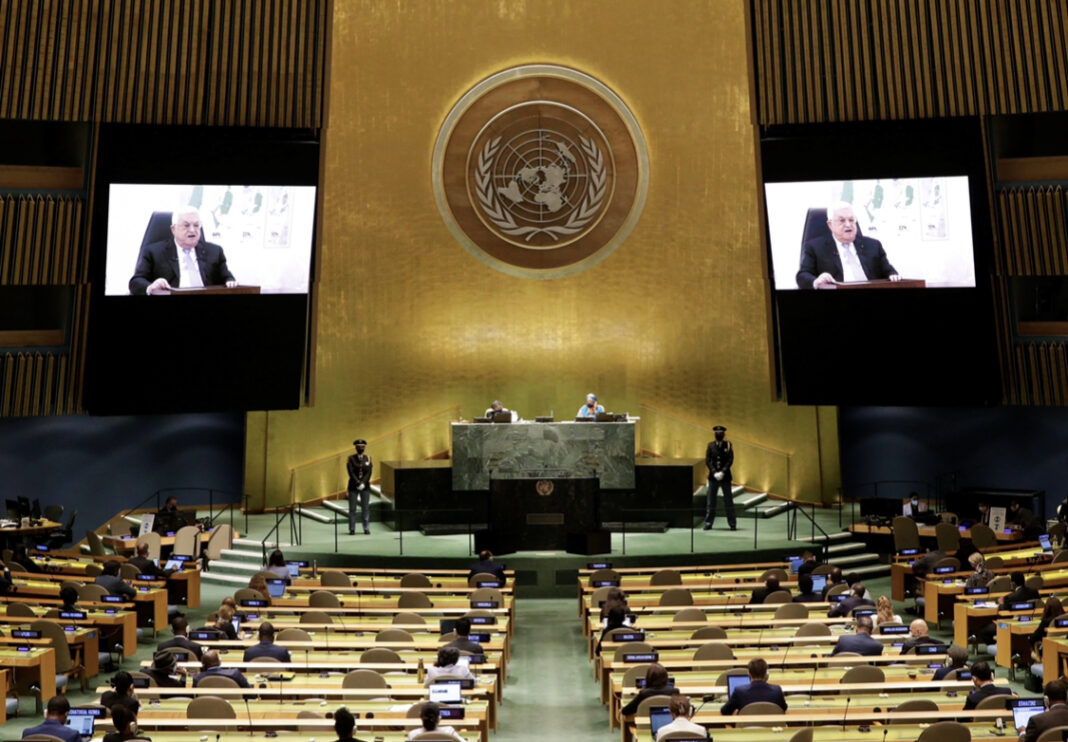 Abbas accused Israel on Friday of destroying the two-state solution with actions he said could lead Palestinians to demand equal rights within one binational state comprising Israel, the occupied West Bank and Gaza.

Addressing the UN General Assembly via video link from the West Bank, Abbas, 85, urged the international community to act to save the two-state formula that for decades has been the bedrock of diplomacy for the Israeli-Palestinian conflict.

Abbas added Israel was “destroying the prospect of a political settlement based on the two-state solution” through its settlements on West Bank land it captured in the 1967 Middle East war.

Most countries view the settlements as illegal, a position Israel disputes.

“If the Israeli occupation authorities continue to entrench the reality of one apartheid state as is happening today, our Palestinian people and the entire world will not tolerate such a situation,” Abbas said, as Israel rejects accusations of apartheid.

“Circumstances on the ground will inevitably impose equal and full political rights for all on the land of historical Palestine, within one state. In all cases, Israel has to choose,” Abbas added from Ramallah, the seat of his Palestinian Authority, which has limited self-rule in the West Bank.

There was no immediate Israeli comment on Abbas’ remarks.

Critics say internal Palestinian divisions have also contributed to the deadlock in US-sponsored peace talks, which collapsed in 2014.

Under interim peace accords with Israel, Abbas’ PA was meant to exercise control in Gaza as well. But Hamas seized the coastal enclave in 2007 and years of on-and-off talks have failed to break their impasse.

Israeli Prime Minister Naftali Bennett, a far-rightist who sits atop a cross-partisan coalition, opposes Palestinian statehood. His government has vowed to avoid sensitive choices towards the Palestinians and instead focus on economic issues.

In his UN address, Abbas threatened to rescind the Palestinians’ recognition of Israel if it does not withdraw from the West Bank, Gaza and East Jerusalem within a year.

“If this is not achieved, why maintain recognition of Israel based on the 1967 borders? Why maintain this recognition?” Abbas stressed.

While some Palestinians and Israelis support the idea of a single binational state, most have very different ideas of what that entity would look like and how it would be governed.

Most analysts contend a single state would not be viable, for religious, political and demographic reasons. Israeli governments have viewed a one-state concept as undermining the essence of an independent Jewish state.

US President Joe Biden reiterated his support for the two-state solution during his own UN address on Tuesday, saying it would ensure “Israel’s future as a Jewish, democratic state living in peace alongside a viable and democratic Palestinian state”.