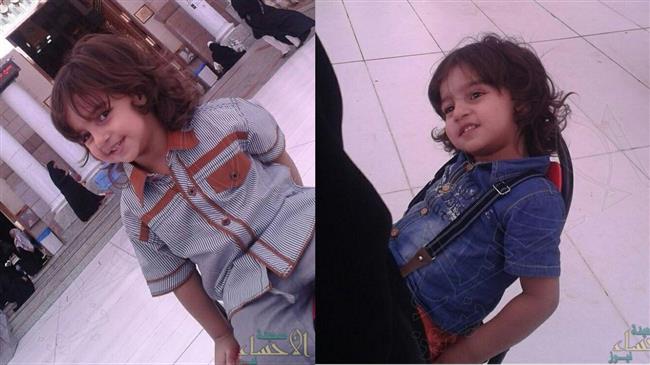 A Saudi little boy, while on a pilgrimage to the holy city of Medina with his Shia mother, has been barbarously killed for unknown reasons, fueling speculations that he could have been a sectarian and hate crime victim, media reports say.

According to what circulated on social media, Zakariya Bader al-Jabir — said to be six or seven years old — was savagely murdered by a taxi driver in front of his mother late last month.

The New Arab website says his mother’s recitation of salutations for the family of Prophet Mohammed (PBUH) outraged the taxi driver who, according to “witnesses”, broke the window of his car, before grabbing the “seven-year-old” boy by the back of his shirt and slitting his throat in front of his mother.

The Muslim Vibe website’s account is also similar to that of the New Arab. It says the mother and the child had taken a taxi on their way to al-Masjid al-Nabawi Mosque in the middle of the day, when the driver “pulled over the car, got out, and forced the boy out of the car near a coffee shop in the al-Tilal neighborhood.”

“The taxi driver then broke a glass bottle to obtain a shard of glass, which he then used to cut the throat of the child and stab him,” the report said.

On the way, driver uncle overheard Mamma whispering ‘salawat/darood’ on the Prophet and his progeny. He curiously asked if we were Shia. When Mamma answered ‘Yes’, driver uncle became furious. (2/3)

He dragged me out of the cab, broke a glass bottle, and slit my throat in front of Mamma. She immediately fainted and I stopped breathing.

What was my crime? (3/3)#Zakariya #SaudiArabia pic.twitter.com/U3WF0EktVg

26 people are talking about this

The Muslim Vibe has quoted onlookers as saying a policeman who happened to be stationed nearby had also attempted to stop the man from attacking the child but was unsuccessful in saving the boy. The policeman restrained the man until police backup was called.

But there is no concrete evidence of any of this; the boy was killed, but the motivation behind the attack remains unknown, and no details of the alleged killer have emerged.

A human rights NGO, Shia Rights Watch, narrates the story of the “six-year-old” boy in another way:

“The mother and her son took cab to visit the shrine of Prophet Muhammad in Medina. An unknown man approached them and asked the mother if she is Shia when they arrived at the shrine, the woman said yes. Minutes after this conversation a car stopped by the woman and pulled the child away from her and attacked him with a broken piece of glass,” the report said, quoting activists as saying.

This 6 year old was slaughtered in Saudi Arabia.

The mother and her son took cab to visit the shrine of Prophet Muhammad in Medina. An unknown man approached them and asked the mother if they were Shi’a. When she said “yes”, they killed her child.

His name was Zakariya.

The Saudi Gazette website also quotes informed sources as saying that the assailant was a 35-year-old man sitting in a coffee shop in al-Tilal neighborhood and went out when he saw the young boy walking in front of him in the company of his mother.

“The sources said the killer quickly grabbed the boy from the hands of his mother, broke a bottle he found near the coffee shop and stabbed him. The boy had ordered a meal from a nearby restaurant and was going to collect it when the man saw him,” the report said.

“The sources said the mother was a heart patient working in Jeddah and she had come to Madina with her son to pray at the Prophet Muhammad’s Mosque.”

The Shia community of Saudi Arabia later gathered in mourning and showed solidarity with the parents. The community also reported this incident was “a result of ongoing violations and lack of protection by the Saudi authority toward its Shia population,” the Shia Rights Watch reported.

Videos went viral earlier this week, purportedly showing the dead body of the little boy in a mosque, where Shia cleric Sheikh Amri is mourning his death and making a speech to a group of people gathering around the body. The cleric tries to console the father and then leads the funeral prayer of the boy.

“This young child reminds us of Karbala. Zakariya is also the victim of Harmala. May Allah grant him paradise with the infant of Imam Hussein (AS),” the cleric is heard saying in one video, referring to the story of the martyrdom of third Shia Imam, Hussein ibn Ali, and his family members, including his infant Ali-Asghar, in Karbala.

While Saudi Arabia has been quick to claim mental health issues on the part of the taxi driver as an explanation for why the boy was murdered, locals have claimed this was an act of sectarianism because the boy was from a Shia Muslim background, and point to the fact that many crimes against the Shia minority of Saudi Arabia have been committed before.

On the contrary to claims of mental health problem, which were apparently alleged by a person claiming to be Zakariya’s uncle, social media users say the person was a fake one, and his claim was false.

SAUDI ARABIA EXPOSED AGAIN: Saudi media are claiming the murder of the 6 year old boy, Zakariya Al Jaber was not committed because he was a Shia. Here’s a video of Zakariya’s funeral ceremony proving that he was murdered SIMPLY because he was a SHIA!#SaudiArabia#ShiaGenocide

Here’s Saudi media explaining the exact scene of the crime that took place in Medina, Saudi Arabia except the part where he was a MURDERED BECAUSE HE WAS A SHIA. They bought a fake person who claimed to be Zakariya’s uncle where he said that the murderer had “mental issues” pic.twitter.com/jbD4KNk8UI

19 people are talking about this

No official statement has been issued by either the police department or the Saudi government as of now over the potential link to sectarianism in this investigation, and this highlights the need for a transparent probe into the heinous crime.

The Saudi Shia community has been under military crackdown by their government and many Shia activists are in prisons and on death row.

The Saudi regime has cracked down on its Shia citizens, particularly in the Eastern Province, which has been the scene of peaceful demonstrations since February 2011.

The protests have been met with a heavy-handed crackdown by the regime. Regime forces have increased security measures across the province.

Back in January 2016, the Muslim world was infuriated when prominent Shia cleric Sheikh Nimr Baqir al-Nimr, an outspoken critic of Riyadh, was executed by Saudi authorities. Nimr had been arrested in Qatif, Eastern province, in 2012.