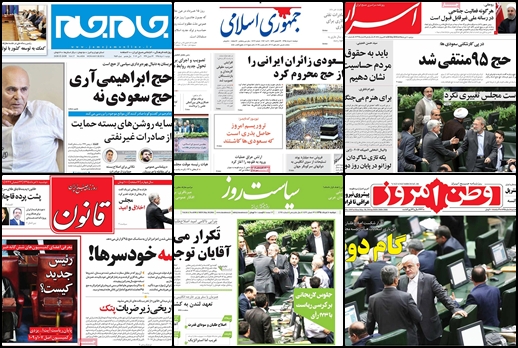 The cancellation of the Hajj pilgrimage for Iranians this year was a big story across Iranian media on Monday May 30. Most headlines put the blame on Saudi Arabia, while only one of them blamed the protesters who attacked the Saudi embassy and increased bilateral diplomatic tension.

In its main headline, Arman-e Emrooz said quoted the Hajj and Pilgrimage Organization, who stated that “We Won’t Have Hajj This Year,” and also cited Russian President Vladimir Putin’s readiness to “Mediate between Iran and Saudi Arabia”. “Hajj 2016 Called off Due to Saudi Arabia’s Obstructionism” was Asrar’s take. The conservative Javan also said, “Iranians’ Hajj Called Off until It Is Held in Abrahamic Style”. Ghanoon, however, was the sole newspaper which chose to focus on the Iranian demonstrators who attacked the Saudi embassy, raising tensions and leading to the severance of diplomatic relations. Its headline on Monday was “Epic of the Wilful! A Report on How the Hajj Pilgrimage Was Called Off for Iranian Pilgrims”.