16,000 Children Head Back to School in Iraq’s Mosul 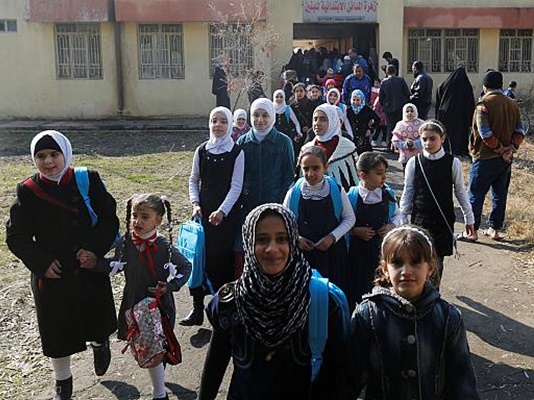 Thousands of Iraqi children are heading back to school in east Mosul after weeks of fighting and more than two years of the ISIS terrorist group’s rule, the UN children's fund UNICEF said Tuesday.

Iraqi forces launched a massive operation to recapture Mosul from the ISIS terrorists 100 days ago and have ousted the extremists from all the central neighbourhoods of east Mosul.

But while returning to school is a good start, recovery will likely be a long process for Iraqi children exposed to bloody urban warfare that followed ISIS efforts to indoctrinate the next generation.

“As fighting subsides in east Mosul, 30 schools reopened on Sunday with help from UNICEF, allowing over 16,000 children to resume their education,” it said in a statement.

“Some schools in the area were closed for up to two years, and girls were banned from getting an education,” it said.

“After the nightmare of the past two years, this is a pivotal moment for the children of Mosul to reclaim their education and their hope for a better future,” UNICEF’s Iraq representative Peter Hawkins said.

ISIS overran large areas north and west of Baghdad in 2014, but Iraqi forces have since recaptured much of the territory they lost.

During more than two and a half years of rule in Iraq, the radical group sought to indoctrinate children into its extremist ideology, using schools as part of its efforts to do so, Al Monitor reported.

It has also featured children in propaganda videos that showed them in ISIS “training” and classroom indoctrination, as well as being used as executioners.

Iraqi forces launched the Mosul operation on October 17 and have made rapid gains on the city’s eastern side this month, but the west still remains under ISIS control.