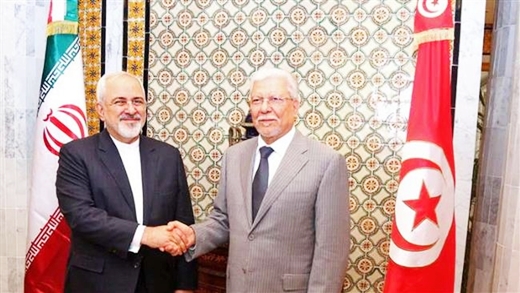 Today’s main confrontation is between extremism and moderation, and all Muslim countries should unite against extremism, said Zarif in a meeting with his Tunisian counterpart.

Iran’s Foreign Minister Mohammad Javad Zarif has called on Muslim countries to join forces in the fight against extremism.

“Today, the main battle is between extremism and moderation, and all Muslim countries should unite against extremism on one front,” Zarif said in a meeting with his Tunisian counterpart Taieb Baccouche in Tunis on Monday.

Zarif also called for an end to foreign meddling in regional crises, saying that dialogue should be a basic strategy to solve the crises in the region and any contribution in this regard should be aimed at facilitating dialogue.

The Iranian foreign minister said that no condition should be set for dialogue in Syria, Yemen and other regions beset by crisis.

Zarif also sat for talks with Tunisian Prime Minister Habib Essid and stressed that the prevention of extremism and violence should be the main theme of cooperation between Muslim countries.

The Iranian foreign minister recalled the Joint Comprehensive Plan of Action (JCPOA), between Iran and P5+1, and said, “The achievement is a victory for all countries in the world and region and the negotiations proved that the basis of resolving problems is dialogue and negotiation not pressure and sanctions.”

Essid, for his part, congratulated Iran on the nuclear agreement, describing it a positive achievement in the international political developments.

The Tunisian premier also called for the expansion of relations with Iran in different fields, including tourism, industry, agriculture and the environment.