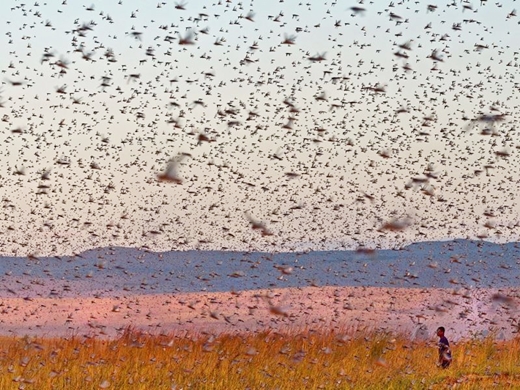 Yemeni insect control experts and the United Nations Food and Agriculture Organization (FAO) have recently warned that the outbreak of locusts in the Arab country might reach neighbouring states, including Iran.

Civil war has been raging in Yemen since March 2015. As with many wars, humans are not the only ones who suffer; the environment also pays a heavy price. Local insect control agencies have struggled to control the locusts, and are worried about the effects the upcoming swarms will have on both Yemen and nearby states.

Here is an article on the phenomenon by KeshavarzNews, which IFP has translated.

A report by Yemeni insect control experts indicates that Yemen is facing a plague of locusts it will not be able to control, as the Arab country struggles with civil war and failing security.

Yemen’s Desert Locust Control Centre issued a warning earlier this month that many desert locusts had matured to their adult flying phase, and remaining populations would do likewise within weeks.

The FAO meanwhile warned that the outbreak threatens the country’s farming, and the swarms could reach neighbouring countries, including Oman, Saudi Arabia, the UAE and Iran.

According to the FAO, just one “small” swarm containing about 40 million insects can eat the same as amount as 35,000 people.

Adult desert locusts are able to survive extreme heat and drought, and can travel up to 150km a day.

“The intervention process to control locusts through spraying insecticide was very difficult due to a number of obstacles, the most important of which were the security aspects and the presence of beehives,” Ahmed Eryani, a spokesman for Yemen’s Desert Locust Control, said.

“In light of the current security and financial challenges, we cannot do anything about it at the appropriate time.”

“The expected locust plague portends a true disaster which will negatively affect food security in all districts of Yemen, and may extend beyond its borders,” said Salah Hajj, the FAO’s representative in Yemen.

The FAO started a last-minute eradication effort last week, SciDev reported, but Eryani said it was too late. “It is difficult to control flying swarms.”

“Devastating swarms could form undetected in conflict areas and, once they are widespread, it will be impossible to control them,” Eryani added.

Yemen last faced an invasion of locusts in 2013. The insects, however, are considered a delicacy and many Yemenis eat them.