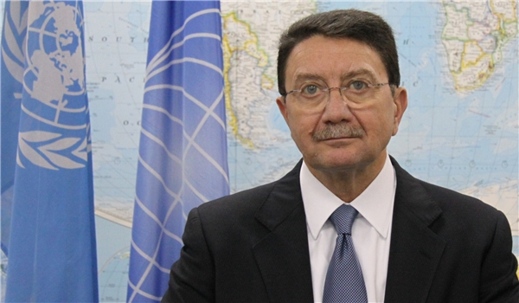 WTO Secretary-General Taleb D. Rifai has underlined that the World Tourism Organization is planning to help with promotion of tourism industry in Iran.

Secretary-General of the World Tourism Organization Taleb D. Rifai has underlined that the WTO is resolved to develop the tourism industry in Iran.

Rifai, who is in Iran to attend the 8th International Tourism Exhibition in Tehran, made the remarks during a tour of the exhibition.

“My presence in Iran means that the WTO is planning to help with promotion of tourism industry in Iran,” Rifai said on Thursday.

He reiterated that the World Tourism Organization is resolved to help Iran with its tourism industry.

In January, Iranian Vice-President and ICHHTO Chief Massoud Soltanifar reiterated that the number of foreign tourists visiting Iran in recent months has considerably increased as they see the country as a safe destination despite the Western propaganda.

“I believe that our country has very high potential for attracting foreign tourists,” the ICHHTO chief added.

He noted that Iran is among the world’s top 10 attractive tourist resorts.

He said that during the first half of the current Iranian year (March 21-September 22), the number of foreign tourists showed a 200 percent rise compared to the corresponding research in Australia.

Soltanifar said Iran has over one million historical and natural sites, adding that only 31,100 or nearly three percent of them have been registered.

In August, the ICHHTO chief said that the foreign tourists brought around $5.5 billion of revenues to the country despite all sanctions and limitations.

In March, Soltanifar invited foreigners to visit Iran’s various tourist destinations, and stressed that the country enjoys a high level of security for foreign tourists.