The 1st ‘World Conference of Mayors and Councillors 2016’ was inaugurated at Tehran’s iconic Milad Tower on Wednesday, July 20, with President Hassan Rouhani and over 2,000 participants in attendance. 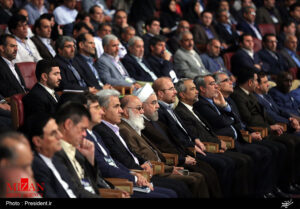 The conference aims at urban development, raising awareness about the latest scientific achievements and researches, solving the problems of urban traffic and air pollution, increasing interactions between institutions and governmental organizations and universities for the efficient use of modern science in the field of urban management, urban planning and urban sustainable development, Mehr reported.

Over 2,000 participants from more than 40 countries and international organizations from such countries as Spain, Germany, Denmark, Mexico and Turkey are taking part in this two-day event.

More than 100 authorities and international investors from Britain, the US, Italy, Switzerland, and South Korea, among others, will also hold panels in the Investment Negotiation Hall, Hamshahri daily newspaper reported.

Educational workshops, professional panels and session on related topics are also held alongside the conference.