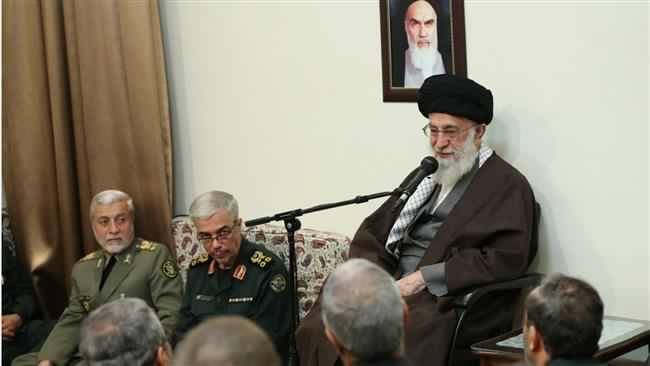 Leader of the Islamic Revolution Ayatollah Seyyed Ali Khamenei says the recent missile strikes by the US military against a Syrian airfield were a “strategic mistake.”

“What the Americans did was a strategic mistake and error and they are repeating the [same] mistakes as their predecessors,” the Leader said in a meeting with senior commanders of Iran’s Armed Forces on Sunday.

“Former American officials created ISIS [terrorists] or helped them, and the current officials are also strengthening ISIS or a group similar to it,” the Leader added.

Elsewhere in his remarks, Ayatollah Khamenei warned that the threat posed by such terrorist groups would backfire on Americans in the future, adding, “Europe is currently in trouble for the wrong step that it took for bolstering Takfiris, and [European] people are not secure at [their] homes and on the street, and America is repeating the same wrong step.”

The Leader then noted that the Americans were quite apt to committing crimes and acts of aggression as they had already carried out such measures in other parts of the world.

Ayatollah Khamenei said some Western countries fully supported the former Iraqi dictator, Saddam Hussein, during the eight-year imposed war against Iran (1980-88), adding that “hypocrite” European governments, which are now claiming that chemical weapons have been used in Syria, gave tons of chemical weapons to Saddam to use them in attacking the Iranian city of Sardasht and the Iraqi city of Halabjah.

Ayatollah Khamenei also warned against the enemy’s plot to undermine the morale of the Iranian officials, nation and the Armed Forces, saying that the enemy was trying to create a feeling of weakness among Iranians through psychological tactics.

However, the Leader stated, the Islamic Republic has proved that it would not succumb to any unfounded remarks and wrong measures taken by enemies, and the Iranian officials and people, who believe in the Islamic Revolution, would not yield to threats due to their trust in God.