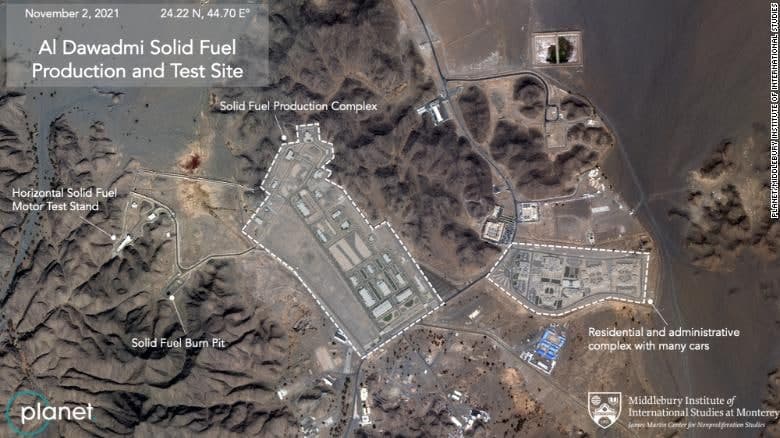 US intelligence agencies have assessed that Saudi Arabia is now actively manufacturing its own ballistic missiles with the help of China, CNN reported.

Saudi Arabia is known to have purchased ballistic missiles from China in the past but has never been able to build its own — until now, according to three sources familiar with the latest intelligence.

Satellite images obtained by CNN also suggest the Kingdom is currently manufacturing the weapons in at least one location.

US officials at numerous agencies, including the National Security Council at the White House, have been briefed in recent months on classified intelligence revealing multiple large-scale transfers of sensitive ballistic missile technology between China and Saudi Arabia, according to two sources familiar with the latest assessments.

The Joe Biden administration is now confronted with increasingly urgent questions about whether Saudi’s ballistic missile advancements could dramatically change regional power dynamics and complicate efforts to expand the terms of a nuclear deal with Iran to include restraints on its own missile technology — a goal shared by the US, Europe, Israel and Persian Gulf countries.

Iran and Saudi Arabia are bitter enemies and it is unlikely Tehran will agree to stop making ballistic missiles if Saudi Arabia has begun manufacturing its own.

“While significant attention has been focused on Iran’s large ballistic missile program, Saudi Arabia’s development and now production of ballistic missiles has not received the same level of scrutiny,” Jeffrey Lewis, a weapons expert and professor at the Middlebury Institute of International Studies, told CNN.

Any US response could also be complicated by diplomatic considerations with China, as the Biden administration seeks to reengage Beijing on several other high-priority policy issues, including climate, trade and the pandemic.

“It’s all a matter of calibration,” a senior administration official told CNN.

The National Security Council and CIA declined to comment.

Asked if there have been any recent transfers of sensitive ballistic missile technology between China and Saudi Arabia, a spokesperson for China’s Ministry of Foreign Affairs told CNN in a statement that the two countries are “comprehensive strategic partners” and “have maintained friendly cooperation in all fields, including in the field of military trade.”

“Such cooperation does not violate any international law and does not involve the proliferation of weapons of mass destruction,” the statement noted.

The Saudi Government and embassy in Washington did not respond to CNN’s request for comment.

CNN first reported in 2019 that US intelligence agencies were aware that Saudi Arabia was collaborating with China to advance its ballistic missile program.

The Donald Trump administration did not initially disclose its knowledge of that classified intelligence to key members of Congress, infuriating Democrats who discovered it outside of regular US government channels and concluded it had been deliberately left out of a series of briefings where they say it should have been presented.

That fueled Democratic criticism that the Trump administration was too soft on Saudi. Nuclear proliferation experts also say Trump’s lack of response emboldened the Saudis to continue expanding their ballistic missile program.

“Normally, the US would have pressured Saudi Arabia not to pursue these capabilities, but the first indicators that the Saudis were pursuing these capabilities indigenously emerged during the Trump era. The Trump administration, to put it lightly, was not interested in bearing down on Riyadh over these issues,” according to Ankit Panda, a nuclear policy and weapons expert at the Carnegie Endowment for International Peace.

Some lawmakers have been briefed over the past few months on new intelligence about transfers of ballistic missile tech between Saudi Arabia and China, multiple sources told CNN.

The Biden administration is preparing to sanction some organizations involved in the transfers, sources told CNN, though some on Capitol Hill are concerned the White House is not willing to impose significant consequences on the Saudi government for its actions.

Given the current state of negotiations with Iran, the Saudi missile program could make an already thorny problem even more difficult.

“A robust Saudi missile program would introduce new challenges to constraining other missile programs in the region. To take just one example, Iran’s missiles, which are a major concern to the US, would be more difficult to constrain in the future without parallel constraints on a growing Saudi program,” Panda told CNN.

New satellite images obtained by CNN indicate the Saudis are already manufacturing ballistic missiles at a site previously constructed with Chinese assistance, according to experts who analyzed the photos and sources who confirmed they reflect advancements that are consistent with the latest US intelligence assessments.

Satellite photos taken by Planet, a commercial imaging company, between October 26 and November 9 show a burn operation occurred at a facility near Dawadmi, Saudi Arabia, according to researchers at the Middlebury Institute of International Studies, who told CNN this is “the first unambiguous evidence that the facility is operating to produce missiles.”

“The key piece of evidence is that the facility is operating a ‘burn pit’ to dispose of solid-propellant leftover from the production of ballistic missiles,” said Lewis, a weapons expert and professor at the Middlebury Institute of International Studies who reviewed the images.

Still, little is known about the ballistic missiles that Saudi Arabia is building at this site, including important details like range and payload.

Considering the facility in question was built with Chinese assistance and new intelligence assessments showing Saudi Arabia has recently purchased sensitive ballistic missile technology from China, it is possible that the missiles being produced there are of Chinese design, according to Lewis.

But there is also evidence Saudi Arabia has looked to other countries for help with developing a ballistic missile program in recent years, making it difficult to identify exactly which weapons system the Kingdom is now building at this facility, Lewis stated.