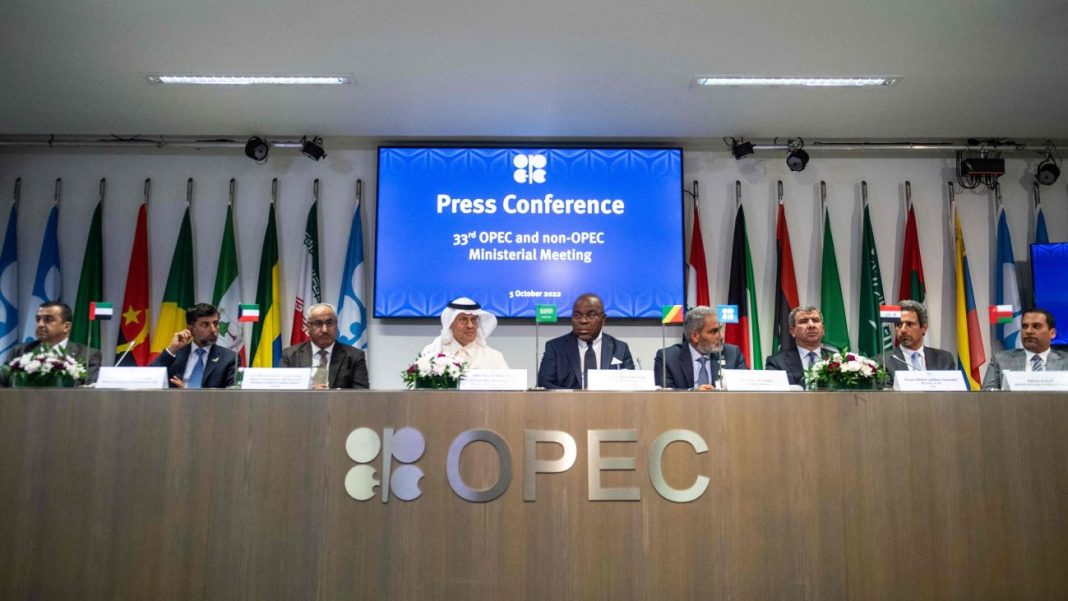 The White House has accused Opec+ of aligning with Russia after Saudi Arabi led the organization to deep oil production cuts, prompting a backlash from countries battling surging energy inflation triggered by Moscow’s invasion of Ukraine.

The Opec+ group announced it would reduce production targets by 2mn barrels a day, equivalent to 2 per cent of global supply, following its first in-person meeting in two years in Vienna. The actual cut in output is likely to be closer to 1mn b/d as many weaker members have struggled to hit production targets in recent months.

The decision came despite extensive lobbying by the US government before the meeting and marked a significant breach with the Joe Biden administration, which is seeking to drive down oil and petrol prices ahead of crucial midterm elections in November and to starve Russia of energy revenues.

The Biden administration criticised the cuts, calling it a “shortsighted decision” at a time when “maintaining a global supply of energy is of paramount importance”. White House spokesperson Karine Jean-Pierre told reporters on Air Force One it was “clear” Opec+ was “aligning with Russia”.

“Show me where is the act of belligerence,” he said in response to questions following the announcement. Energy markets required “guidance without which investment would not happen”.

In response to the Opec+ decision, the US said it would continue to release oil from its strategic stockpiles “as appropriate” and that it was exploring “additional responsible actions” to lift domestic oil supply.

President Biden will also work with Congress on legislation to “reduce Opec’s control over energy prices”, the statement added, in an apparent reference to anti-cartel legislation known as NOPEC that has long been considered by US lawmakers but has not been passed.

Oil prices have risen more than 5 per cent since Friday in the run-up to the meeting, and international benchmark Brent edged higher to $93.95 a barrel after news of the cut.

Analysts say Saudi Arabia’s move, which will damage western governments’ efforts to curb Russian oil income used to sustain its war in Ukraine, marked a significant moment in Riyadh’s 75-year energy alliance with the US.

“Saudi Arabia has set Opec on a collision course with the free world. They have sided with Russia in the name of protective oil market management — just as consumers across the world are battling inflation and the rising cost of living,” said Bill Farren-Price, a veteran Opec watcher at consultancy Enverus. “There are bound to be political consequences for Riyadh.”

The cartel’s decision came hours after EU countries agreed to a US plan to impose a price cap on Russian oil exports, an effort by western countries to drive down prices of crude and fuel. Saudi Arabia and other Opec Gulf countries fear this plan would reduce oil prices across the board and could even be used against them in future.

“This is hugely political and a very clear signal of Opec’s discontent regarding the price cap,” Amrita Sen, chief oil analyst at Energy Aspects, stated, adding, “Regardless of whether the price cap is actually effective, they see this as a dangerous precedent.”

“Everything has a price,” he noted, adding, “Energy security has a price as well.”

United Arab Emirates energy minister Suhail Al Mazrouei said the group was focused on averting an oil price crash as in 2008, and did not want to get involved with discussions over Russia’s role in the market.

Shortly after the announcement, Biden’s senior aides said the American president “is disappointed” by the decision “while the global economy is dealing with the continued negative impact of Putin’s invasion of Ukraine”.

“The President’s work here at home, and with allies around the world, has helped to bring down U.S. gas prices: since the beginning of the summer, gas prices are down $1.20 – and the most common price at gas stations today is $3.29/gallon,” National Security adviser Jake Sullivan and top economic adviser Brian Deese noted.