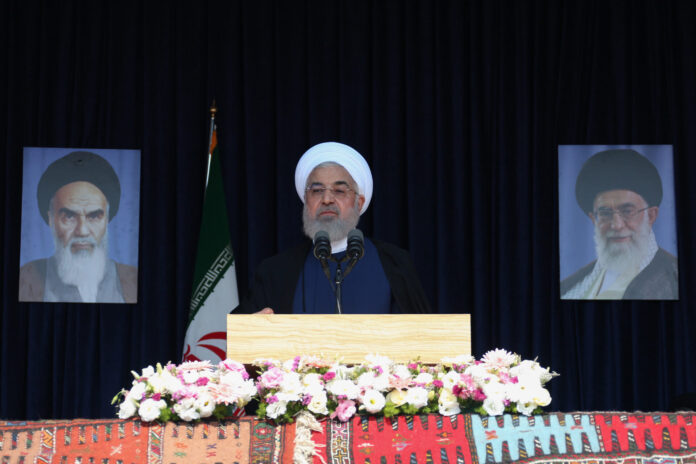 Iranian President Hassan Rouhani says the White House lies about Iranian nation’s “regression” and the collapse of the country’s economy under the current sanctions.

In an address to a large group of people in the North Khorasan province in north-east of Iran on Sunday, Rouhani said some people in the White House falsely claim that Iran’s economy is on the verge of collapse under the US sanctions.

“It is a lie that the Iranian nation has deviated from the path of progress due to the US sanctions,” he said.

He went on to say that despite more than 14 months of maximum pressure by the US, Iran’s foreign debts have decreased.

“Two years ago, we had about $12.4bn in foreign debts but the figure has decreased to $9.5bn this [Iranian calendar] year. This means about 25 percent reduction in our foreign debts,” he noted.

President Rouhani congratulated the Iranian nation on “this victory” and said it shows that despite pressures, Iran has not called for help from foreigners and international funds.

He then referred to the growing employment in Iran over the past 14 months and added since the last Iranian calendar year, the unemployment rate has decreased.

“The unemployment rate in Iran has decreased from 12.1 percent last year to 10.8 percent this year. We created 321,000 more jobs in this year’s spring compared with the similar period last year,” he noted.

Rouhani said the achievements were made due to hard efforts by the Iranian from all walks of life from artisans to entrepreneurs, workers, farmers and youths.

“We have managed to create new jobs and gain self-efficiency in some agricultural areas,” he noted.

The remarks come as tensions are running high between the US and Iran since Washington’s decision in May last year to abandon the 2015 Iran nuclear deal and re-impose sanctions on Tehran as part of a “maximum pressure” campaign.

The pressure, the US officials claim, is aimed at forcing Iran to negotiate over a new deal that addresses Iran’s ballistic missile program and regional influence as well. Iran, however, has rejected such talks, and has decided to reduce its commitments under the JCPOA to prompt other parties to fulfil their own side of the bargain.