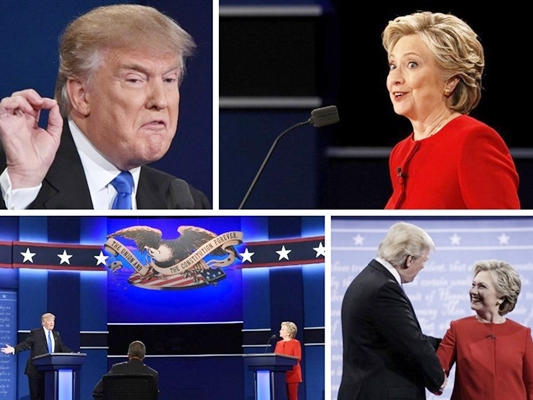 US presidential candidates Hillary Clinton and Donald Trump have gone head-to-head over the issue of race, the economy and foreign policy in their first televised debate ahead of November's election.

Clinton accused her Republican rival of racism, sexism and tax avoidance, while Trump, a businessman making his first run for public office, repeatedly cast his opponent as a career politician and demanded that she should account for her time in government.

Monday’s televised face-off was the most anticipated moment in the election campaign, with both sides expecting a record-setting audience for the showdown at Hofstra University in New York.

In one of the more heated exchanges, the two candidates attacked each other for the controversy Trump stoked for years over whether President Barack Obama was born in the US.

Obama, who was born in Hawaii, released a long form birth certificate in 2011 to put the issue to rest. Only earlier this month did Trump say publicly that he believed Obama was born in the US.

“He (Trump) has really started his political activity based on this racist lie that our first black president was not an American citizen. There was absolutely no evidence for it. But he persisted. He persisted year after year,” Clinton said.

“Nobody was pressing it, nobody was caring much about it … I was the one that got him to produce the birth certificate and I think I did a good job,” Trump said.

The Republican also backed the controversial “stop-and-frisk policing” tactic as a way to bring down crime, while the Democrat said the policy was unconstitutional and ineffective.

The stakes were high as the candidates headed into the debate tied in most national polls ahead of the November 8 election.

The centerpiece of Trump’s case against Clinton, a former senator and secretary of state, was that she was a “typical” politician who has squandered opportunities to address the domestic and international issues she is now pledging to tackle as president.

“She’s got experience,” he said, “but it’s bad experience”.

When the debate moved to international affairs, Trump, who has faced accusations that he has a weak grasp of policy, accused his rival of sowing chaos in the Middle East during her tenure as secretary of state.

“It’s a total mess, under your direction, to a large extent,” the Republican said.

But he appeared on shaky ground as he defended his refusal to reveal his plan for defeating the Daesh (ISIL) terror group.

You’re telling the enemy everything you want to do. No wonder you’ve been fighting ISIS your entire adult life,” he said, with Clinton replying that, unlike, her rival, she at least had a plan for fighting the armed group.

Trump also repeatedly insisted that he opposed the Iraq War before the 2003 US invasion, despite evidence to the contrary.

The Republican charged that Clinton and Obama created a vacuum when the US withdrew the majority of its forces from Iraq in 2011 after years of war.

Daesh “wouldn’t have been formed if (more) troops had been left behind,” he said, Al Jazeera reported.

Clinton countered by saying Trump had supported the invasion of Iraq, adding that the agreement about when US troops would leave Iraq was made by Republican president George W Bush, not Obama.

The Republican also appeared to contradict himself on how he might use nuclear weapons if he is elected president. He first said he “would not do first strike” but then said he could not “take anything off the table”.

Clinton said Trump was too easily provoked to serve as commander-in-chief and could be quickly drawn into a war involving nuclear weapons.

“A man who can be provoked by a tweet should not have his fingers anywhere near the nuclear codes,” she said.

Trump replied: “That line’s getting a little bit old.”

In feisty exchanges on the economy, Clinton called for lowering taxes for the middle class, while Trump focused more on renegotiating trade deals that he said have caused companies to move jobs out of the US.

Clinton attacked Trump for not releasing his income tax returns and said that decision raised questions about whether he was as rich and charitable as he has said.

“There’s something he’s hiding,” she declared, scoffing at his repeated contentions that he will not release his tax returns because he is being audited. Tax experts have said an audit is no bar to making his records public.

Clinton said one reason he has refused is that he may well have paid nothing in federal taxes. He interrupted to say, “That makes me smart”.

Trump aggressively tried to turn the transparency questions around on Clinton, saying he would release his tax returns, “when she releases her 33,000 e-mails that have been deleted,” alluding to the Democrat’s use of a private email server as secretary of state.

Toward the end of the debate, Trump said Clinton did not have the endurance to be president.

“She doesn’t have the look, she doesn’t have the stamina,” he said. Trump has made similar comments in previous events, sparking outrage from Clinton backers who accused him of leveling a sexist attack on the first woman nominated for president by a major US political party.

Clinton leapt at the opportunity to remind voters of Trump’s numerous controversial comments about women, who will be crucial to the outcome of the November election.

“This is a man who has called women pigs, slobs and dogs,” she said.

Citing her own public record, Clinton retorted: “As soon as he travels to 112 countries and negotiates a peace deal, a ceasefire, a release of dissidents … or even spends 11 hours testifying in front of a congressional committee, he can talk to me about stamina.”

Quinnipiac University declared the race “too close to call” on Monday, with its latest national poll of likely voters suggesting 47 percent of support for Clinton and 46 percent for Trump.

“It really felt great,” Trump told reporters after the debate.

But political analyst Jason Johnson told Al Jazeera that he would not be surprised “if we see slight chances in the polls at the end of the week” in favor of Clinton.

“Trump came out aggressively … but never had much in terms of substance or answers,” he said.

“I think Hillary did what she needed to do better than Trump. She offered solutions.. explained how she sees America and her worldview. Her supporters will come out very enthusiastic.”

It was the first time the two candidates stood side by side since becoming their parties’ nominees.

Two more debates are to follow on October 9 and October 19.