Untimely death of Chalabi, a bane of Iraq’s political process 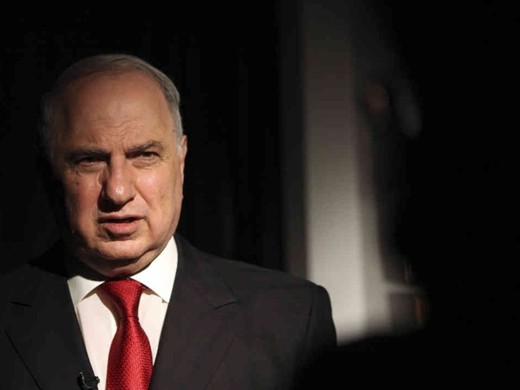 The ill-timed death of Ahmed Chalabi, a key lobbyist for the US invasion of Iraq, will cost the Iraqi political process dearly, analysts say.

Ahmed Abdel Hadi Chalabi, who had recently assumed the responsibility of balancing the budget, unexpectedly left Iraq’s political and economic scenes at a time when the country’s economic crisis has come to a head. The untimely departure of the Iraqi politician and economist on November 3 came as a shock to everybody.

Chalabi, who has been characterized by world media as the key to the overthrow of one of the world’s most violent authoritarian regimes, died peacefully at the most critical times of the Iraqi political process. The absence of this statesman whose expertise is badly needed in his home country to help patch up differences and reconcile political movements will create a void in the struggling country.

Khabaronline.ir on Tuesday published a report on the death of the influential Iraqi politician and took a closer look at who Chalabi really was and what the former Iraqi deputy prime minister did during his 71-years-long life. The following is the translation of the report:

He hailed from a famous family in Iraq with political and economic leanings. His father was appointed commerce minister when Iraq was a kingdom. Ahmed was known as a key opponent of Saddam in the 80s and 90s.

Chalabi was among the few political opponents of the Baath party [which ruled Iraq until the US-led invasion in 2003] who was openly cursed out in media. Accounts of his role in the country’s developments over the past 20 years are many. Chief among them is a report on his widespread political contacts from East to West which helped him convince the administration of George W. Bush (Bush 43) to take military action against Iraq and topple Saddam’s government.

Many analysts have commented on Chalabi’s lobbying power in the 90s and early 2000s, praising him as a rare political figure who managed to simultaneously establish close ties with the Islamic Republic of Iran and have friendly relations with Washington – up until the appointment of Paul Bremer as non-military ruler of the US in Iraq [leader of the occupational authority of Iraq following the 2003 US-led invasion]. He was also a close friend of Donald Rumsfeld, President Bush’s secretary of defense.

Chalabi was the only figure in Saddam’s Iraq who had the backing of most opposition groups. So when these groups agreed to act against Saddam under the same umbrella, Chalabi was picked as the leader of the new [integrated] political body. This led to the formation of the Iraqi National Congress (INC) which served as the umbrella Iraqi opposition group [and Chalabi headed the executive council of the INC].

The ensuing differences created rifts in the new political group, but Chalabi turned the congress into a political party which remains active in the country’s political landscape to date.

Following the collapse of Saddam’s government in March 2003, there were confrontations between the US-backed government of [Prime Minister] Ayad Allawi and the movement led by Muqtada al-Sadr. Back then Chalabi forged an alliance of Shiites, stopped the killing of Sadr’s followers and foiled a US plot to kill Muqtada al-Sadr in Najaf.

Although Chalabi was a liberal figure, he was always viewed as a politician with close ties with the sources of emulation in Najaf thanks to his abidance by family traditions. In the 2014 elections, when he was asked about the reason why he had aligned himself with the Islamic Supreme Council of Iraq (ISCI), he replied that he had always been in alliance with the ISCI, citing the [deep-rooted] friendship between the Chalabi’s and the Hakim family which dated back to the time when Ayatollah Muhsin al-Hakim was a source of emulation.

Chalabi made it to parliament in the 2014 elections. As expected, he was placed at the helm of Iraq’s economic machine and was asked to draw up the 2015 budget. The general outlines of his budget plan drew the least amount of opposition in parliament.

He was also involved in balancing the 2016 budget, devising plans to regulate Iraq’s banking policies.

Ahmed Chalabi died of a heart attack at his Kadhimiya residence in Baghdad on November 3. As a result of his death, the National Coalition – which is the biggest caucus in the Iraqi parliament – lost one of its strongest men.

Iraq needs people who favor talks and dialogue in critical conditions and Chalabi’s death will inflict huge losses on the country. Hamam Hamoudi, the first deputy speaker of the Iraqi parliament, in a message of condolences, described Chalabi’s death as a big loss for the political process in Iraq.

Chalabi’s death comes at a time when Iraq is being threatened by the world’s most barbaric terror group [ISIS]. More importantly, the Arab country is teetering on the brink of bankruptcy and the loss of Ahmed Chalabi who was a political and economic underpinning for his country will be badly felt.