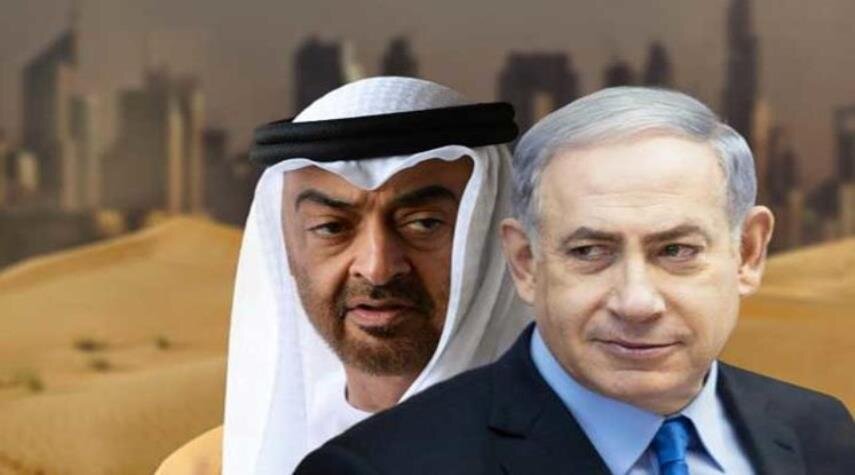 United Arab Emirates (UAE) is the name of a country that didn’t exist before 1971 when the area was called Emirates of Motesalehe or the Emirates of the Coast of Oman.

This country which appeared on the map of the world on December second 1971, now has taken up a destabilizing role in Middle East and is trying to interfere in the affairs of other Arab countries in the region, both openly and in secret.

UAE’s destructive role, especially in suppressing public protests became more evident after the events of September 2011; as UAE and its allies did their best to stop the progress of Arab countries and prevent the public uprisings that were rooted in Islamic reawakening.
On the other hand, Al Nahyan, one of the six ruling families of the UAE, did its best to destroy all resistant groups that were against Zionists such as Hamas and Hezbollah to prepare the ground for normalizing relations between Israel and Arab nations; something that led to creation of the Deal of the Century.

To give an example, Mahmoud al-Mabhouh, who was among top Hamas leaders and was the chief of the Izz ad-Din al-Qassam Brigades was assassinated in Dubai. Later, Yedioth Ahronoth, Israeli daily newspaper said the assassination was planned by Mossad and was carried out in cooperation with UAE’s intelligence service.

There are many similar examples, in another one, we see that UAE’s secret service agent enters the Gaza Strip through Egypt, under the cover of a Red Crescent volunteer to spy on Hamas and Palestinian resistant groups in order to give information to the Zionist regime.
Apart from activities against Palestinians, UAE has also tried to sabotage Muslim Brotherhood (Ikhwan Al-Muslimin) in Egypt through its media channels such as Al-Hayat, Al Youm Al Sabee, and Al-Masry Al-Youm. Furthermore, UAE gave full financial support and security help to certain groups in order to topple Muslim Brotherhood.

UAE is a big supporter of Egypt’s current government. The country keep spending billions of dollars to carry out Zionists’ plans in Middle East and suppress any democratic movement in the region that is based on public votes and people’s determination.

An example of UAE’s interference in Libya is the story of Yusef Mobarak. He was arrested in Al-Aqiq Airport in Tripoli after the intelligence service of Libya’s Government of National Accord accused him of taking pictures from high-security centers and foreign embassies in Tripoli. After investigations, it was revealed that Yusef was a main link to Khalifa Haftar, the renegade military commander of Libya, and was particularly supported by UAE and Abdel Fattah el-Sisi, Egypt’s president.

Everyone knows that UAE’s army has given modern weapons and high-tech tanks to Khalifa Haftar and has supported the renegade commander against Tripoli. UAE’s interference in Libya is aimed at keeping the country entangled in wars and chaos, so that Libya can become a heaven for the intelligence services of the United States, Israel and UAE.

UAE has also been seriously interfering in Tunisia. The country is putting enormous political and economic pressure on Tunisia to expand its control over it and crush all the public movements. They have forced Tunisia to choose between surrendering to UAE and suffering under a security crisis.

Yemen is another country that is crushed by UAE’s interference. UAE has done a dirty job in Yemen by destroying Yemen’s infrastructures and killing thousands of innocent Yemeni citizens.

The octopus of UAE has extended its claws to Oman as well. Oman intelligence service discovered an Emirati spy network that was supposed to predict and influence what happens in Oman after Sultan Qaboos. The network was trying to make strong bonds with anti-government tribes such as Al Shuluh tribe which has close relationships with UAE, especially with Ras al Khaimah emirate.

Another UAE spy network was discovered in Turkey and brought shame to Emirati leaders. According to Turkish media, UAE was trying to support some of the government dissidents and army commanders including Fethullah Gülen. Turkish intelligence service also discovered that Mohammed Dahlan entered Turkey under a fake identity and by using an Emirati passport. In this secret trip, he had meetings with the opponents of Turkish government.

UAE is also trying to expand its reach to the Islamic Republic of Iran as well. The country has already given financial support and intelligence to some terrorist cells that worked against Iran. Once again, UAE’s efforts to interfere in Iran was proved when it was revealed that Global Hawk drone was sent to Iran from an Emirati base.

Apart from having a destructive role in Middle Eastern countries, UAE is quickly expanding its relationship with the Zionist regime. Now, Zionists have representative offices in Abu Dhabi and can freely travel to UAE.

All these facts show that Al Nahyan family and specially Mohammed bin Zayed, the Crown Prince of the Emirate of Abu Dhabi, are the main causes of war in Arab World and division among Muslims. They are completely abiding by the goals of the Zionist regime; therefore, the Muslim community and Arab world should free itself from the influence of this evil element.