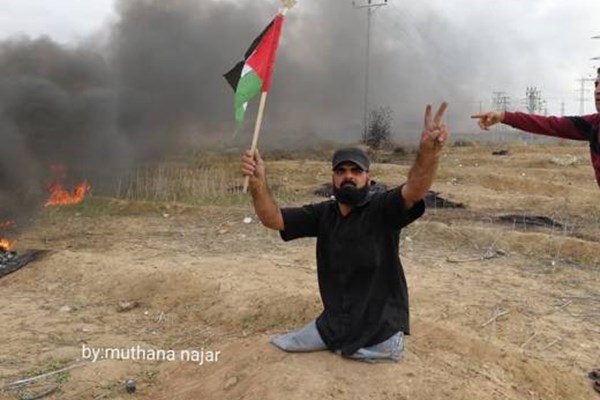 The martyrdom of a disabled Palestinian veteran by Israeli forces in Gaza Strip has left a TV interview with him unfinished.

Ibrahim Abu Soraya was the guest of a Palestinian TV channel for an interview on the Palestinians’ outrage at the latest US provocative decision to recognize Jerusalem al-Quds as Israel’s capital; however, the interview was left unfinished after Israeli forces killed him during an anti-US rally in the Gaza Strip.

During protests against the US’ decision on the second Friday of rage in the Gaza Strip, Israeli forces killed at least four Palestinians including Abu Soraya, a Farsi report by Fars New Agency said.

Abu Soraya who had lost his two legs earlier during a Palestinian war against Israel was shot dead on the head by an Israeli sniper during a rally in the impoverished enclave.

Palestine TV had a short interview with Abu Soraya on Friday before the anti-US rally began. During the interview, Abu Soraya underlined he would take part in the rally and fight for the liberation of Jerusalem al-Quds from the Zionists.

Following the interview conducted at Abu Soraya’s home, the Palestine TV reporter said his crew would follow Abu Soraya during the rally and continue the interview on the street. But with the death of Abu Soraya, 29, the interview remained unfinished.

Jerusalem al-Quds remains at the core of the Israeli-Palestinian conflict, with Palestinians hoping that the eastern part of the city would eventually serve as the capital of a future independent Palestinian state.