Turkey Working to Avoid Negative Impacts of US’ Sanctions on Iran 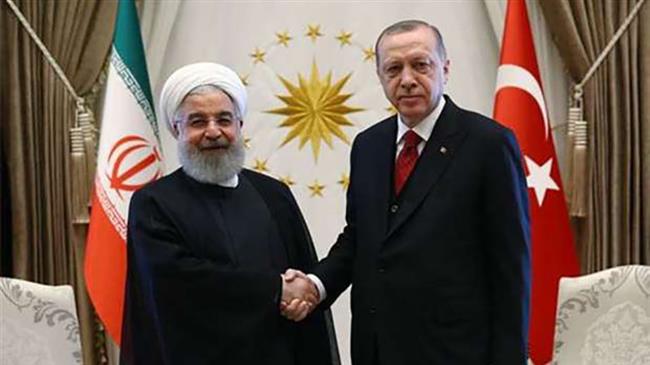 Turkey's Foreign Ministry says the country's officials are working to prevent Ankara from being negatively affected by the US move to re-impose nuclear sanctions against Iran in the wake of Washington's withdrawal from a historic nuclear deal signed between the Islamic Republic and the P5+1 group of countries in 2015.

The ministry made the announcement in a statement on Friday after a US delegation of Treasury and State Department officials held talks with Turkish authorities in Ankara on upcoming Washington’s sanctions against Tehran.

US President Donald Trump announced on May 8 that Washington was walking away from a nuclear agreement, officially known as the Joint Comprehensive Plan of Action (JCPOA) signed between Iran and the P5+1 group of countries in 2015.

The US president also said that he planned to reinstate US nuclear sanctions on Iran and impose “the highest level” of economic bans on the Islamic Republic.

The Turkish foreign ministry’s statement further emphasized that Iran was an important neighbor for Turkey and that Ankara would continue to monitor the US sanctions within this framework.

Washington has said it would be returning the sanctions in August and threatened the countries that maintain business with Iran despite the bans with “secondary sanctions.”

It has also warned countries against keeping up their crude purchases from Iran from November 4 onward.

Iranian Foreign Minister Mohammad Javad Zarif said on Monday that the Islamic Republic has lodged a complaint with the International Court of Justice (ICJ) over the United States’ “unlawful” move to re-impose “unilateral” sanctions against Tehran.

“Today Iran filed a complaint [with] @CIJ_ICJ to hold US accountable for its unlawful re-imposition of unilateral sanctions,” Zarif said in a post on his official Twitter account on Monday.

“If the United States’ decisions are aimed at peace and stability, then we’ll support them, but we don’t have to follow every decision. Being allies doesn’t mean following every decision word for word,” Cavusoglu told the Turkish broadcaster NTV in an interview.

Iran has been Turkey’s leading supplier of crude oil for most of the past two decades, ceding first place to Iraq only for three years during the recent period of US sanctions.

Iranian First Vice President Es’haq Jahangiri said on July 10 that the upcoming US move to re-impose sanctions on Iran will create “difficult conditions” for the country but the Islamic Republic will forcefully resist against the United States’ economic war.

“Given the enemy’s economic war, we will face new and difficult conditions and must stand against this war with full power,” Jahangiri said.

His remarks came a day after Russia’s Foreign Minister Sergei Lavrov said the three major European signatories to the landmark nuclear deal with Iran had agreed to establish trade ties with Iran independent of the US dollar.

Lavrov said the decision by France, Germany and Britain would mainly concern small and medium-sized companies.