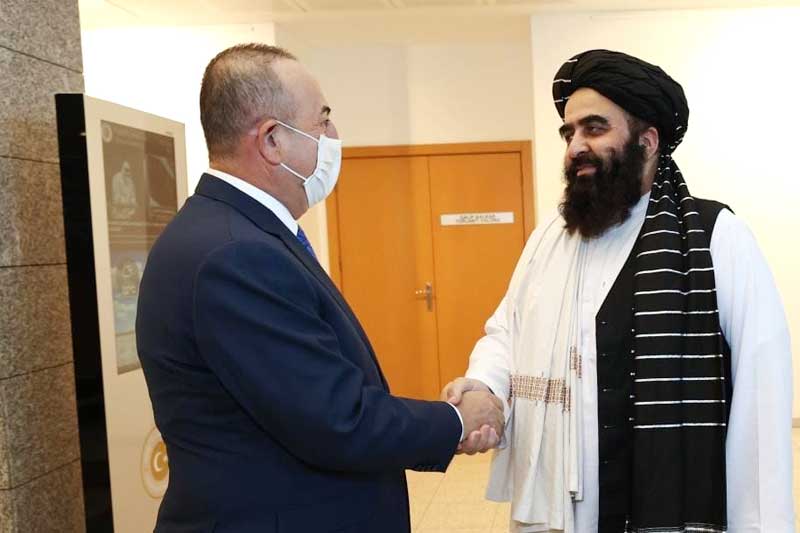 Turkey has called on the international community to cooperate with the new rulers of Afghanistan. The comment comes after a high-level Taliban delegation visited Ankara for talks with Turkish officials for the first after the group seized Kabul last August.

Turkey has called on the international community to help the Taliban overcome Afghanistan’s humanitarian crisis, officials said after holding talks with the group’s leaders, adding that this does not imply formal recognition.

Speaking after the closed-door talks, Cavusoglu urged international engagement with the Taliban.

“We have told the international community about the importance of engagement with the current Taliban administration. In fact, recognition and engagement are two different things,” he stated.

“The Afghan economy should not collapse. Therefore, we have said the countries that froze Afghanistan’s accounts abroad should act more flexibly so that salaries can be paid,” he continued.

The World Bank halted funds to Afghanistan after the Taliban swept back to power in August. The international community has condemned the group’s actions in some provinces, where they brought back public hangings and barred women and girls from going to school or returning to work.

Turkey has sought to use its position as the only Muslim-majority member of the NATO defence alliance to secure a greater role in Afghanistan after the US troop withdrawal.

Cavusoglu said he had urged the Taliban to uphold women’s rights, including access to jobs and education.

“We asked them not to see this as a precondition or a demand, but that this is also the expectation of the other Muslim countries,” he added.

Turkey’s foreign minister also stressed the need to ensure security at the airport before regular flights could resume.

“Today, we explained to them once more the expectations on the issue of security – not only ours but the entire international aviation community – for running the airport and especially the start of regular flights,” he stressed.

The Taliban representative has been holding talks with foreign officials, warning them that Western sanctions will further undermine security in Afghanistan.

The meeting between Turkey’s foreign minister and the high-level delegation of Taliban rulers was the first since the group’s takeover of the country.

It comes after Taliban leaders held a series of talks with the United States, 10 European nations and European Union representatives in Qatar earlier this week.

Turkey, which hosts more than 3.6 million Syrians, has warned European countries that it will not accept an influx of migrants from Afghanistan.