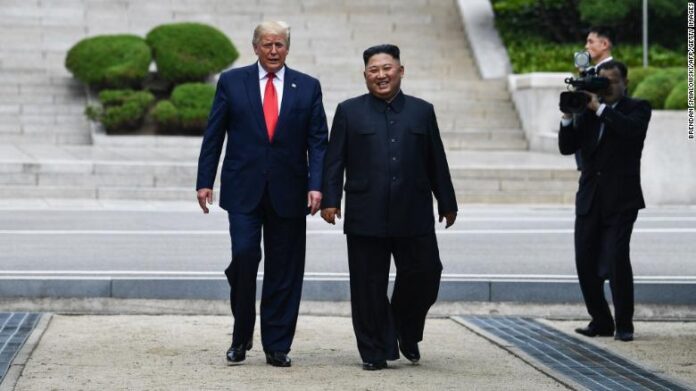 US President Donald Trump has made history as the first sitting American president to step onto North Korean soil.

He met North Korean leader Kim Jong Un at the border between the two Koreas on Sunday, before stepping over and walking 20 steps into North Korea.

First, the two leaders strode toward the border line dividing the two Koreas. They then shook hands, before walking together back across the line into South Korea.

Trump’s move came after Kim said, “If you step over this line you will be the first US president to step on North Korean soil.”

Trump then stepped over, to which Kim said, “President Trump has just walked across the demarcation line. That has made him the first US President to visit our country. Actually just looking at this action, this is an expression of his willingness to eliminate all the unfortunate past and open a new future.”

Trump thanked Kim once again for meeting and added, “When I put out the social media notification, if he didn’t show up, the press was going to make me look very bad.”

Trump said because Kim showed up, they both looked good.

“This could be a very historic moment and I guess that’s what it is,” Trump said. “I think the relationship that we’ve developed has meant so much to so many people.”

In remarks to press before closing the doors, Kim said he was “very surprised” by Trump’s open invitation on Twitter, adding, “I had wanted to meet him again.”

Trump responded, thanking Kim for the meeting and calling it “a special moment.”

The meeting was an historical moment and a huge step forward in a relationship which appeared to be unravelling after a failed second summit between Trump and Kim in Hanoi, Vietnam earlier this year.

That relationship now seems to be firmly back on track, with Trump and Kim greeting each other warmly and appearing to enjoy each other’s company. Trump even suggested they could follow the meeting at the DMZ with a visit by Kim to the White House, the first ever time a North Korean leader would visit the US if it took place.