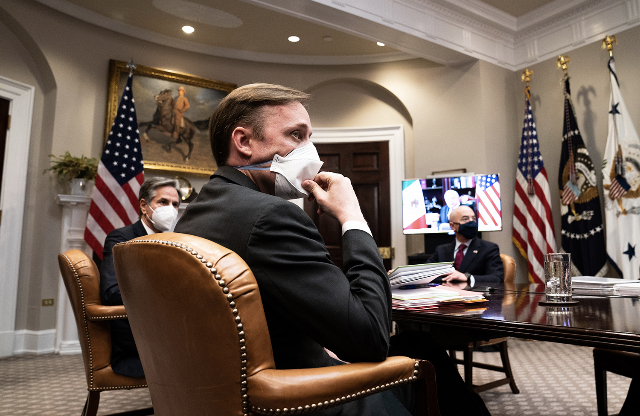 The ambassadors and Sullivan discussed joint efforts to hold the Houthis accountable, without referring to the crimes of the Saudi-UAE coalition on Yemeni civilians.

Sullivan reiterated the United States’ commitment to the security of both the UAE and Saudi Arabia, where tens of thousands of American citizens live and work, the White House said.

He also welcomed their commitment to supporting UN-led efforts to ultimately end the war in Yemen through a political process, and underscored the importance of all parties to the conflict abiding by their obligations under international humanitarian law, it added.

On Monday, Yemeni armed forces launched massive missile and drone strikes against the United Arab Emirates (UAE) and Saudi Arabia, only a week after they carried out a series of attacks against the UAE in retaliation for its involvement in the devastating Saudi-led war on Yemen.

The US embassy and consulate in the UAE advised American citizens in the Persian Gulf country to “maintain a high level of security awareness.”

Such statements are rare, for the UAE is largely viewed as a safe place in the Middle East, but the US Embassy issued a similar security alert last week when Abu Dhabi was targeted by the Yemeni forces.

Yemeni forces carried out retaliatory airstrikes against strategic facilities deep inside the UAE on January 17, using domestically-manufactured combat drones and ballistic missiles. At least three people have been killed and six others wounded in the suspected drone attack, according to Emirati authorities.

Riyadh has lately ramped up its airstrikes against various regions across Yemen. At least 90 people were killed when a Saudi strike hit a detention center in the northern province of Sa’ada on Friday, and nearly two dozen were killed in the capital of Sana’a in an operation on Tuesday.