The Life of Underage Refugees at the Idomeni Border: Report 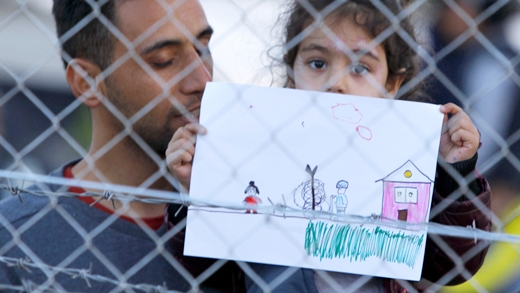 The migrant crisis facing Europe continues, with little end in sight, despite various pledges, schemes and commitments from governments, NGOs and civil society. Greece, with its many islands and its proximity to the Middle East, has been overwhelmed by refugees and is struggling to cope. Rozbeh Arash, reporting for Vaghaye Ettefaghieh, visited Idomeni, one of the camps in Northern Greece, near the Macedonian border, and reports on the conditions faced by many of the children there. Article translated by IFP.

He dreams of home in his own childlike way, holding a stone as a gun, sitting on a wooden horse. On the horse, he’s racing home, beyond the borders closed by the Turkish soldiers. With his gun, he kills the terrorists in his homeland. He finally arrives. He visits his friends and takes sweet bites of the fruits in his grandfather’s house.

In reality, however, he’s waiting for the borders to open. The border that stands between him and the happiness he has been promised. He’s 16 and his only hope is to join his brother in Germany. He has been waiting for two months in a dirty shelter in Idomeni in Northern Greece, depressed, praying that Macedonia won’t close its borders to Europe beyond.

Around 6 in the morning, he wakes up, and makes a sudden decision. Each and every cell in his body tells him that it’s his right, but he doesn’t know who to ask for it. Where should he claim it? In the morning twilight he crosses the barbed wire of the border and disappears into the green forest beyond.

No one saw Kusani after that. His mobile phone can’t be reached.  30-year-old Qaed, who knew Kusani in the camp for a while, says, “No one called for money or for help. None of the smugglers have any news about him. He’s disappeared, or been kidnapped.”

This is the world experienced by hundreds of underage people at the Idomeni border. They’re deprived of their childhood, and grow up just waiting. Since February, Macedonia’s government has closed the border to refugees. They make no exceptions. Europe has also abandoned them. They expect these children to be happy with the cartoons shown to them on the tiny camp TV. Life’s difficulties mean they’ve grown up not understanding such things. They only understand enough to not to fall into the trap that is Greece. One of the camp’s officials says, “These children play. They run here and there. They are not hungry, but they have forgotten happiness and smiles.”

The Greek authorities have offered official registration to these children, but the stories that they have heard of long detention periods, and poor treatment by Greek police has made them rather wait than live in Greece. The risk of entering Macedonia illegally is very high. The Macedonian guards beat them ruthlessly. Their only choice is to live here in the camp with 10,000 others, where they are threatened by bad conditions, violence and thousands of adults. Their young eyes and hopeful hearts still stare at the border. One day, that border will perhaps be opened, but until then, happiness and smiles remain a distant memory.