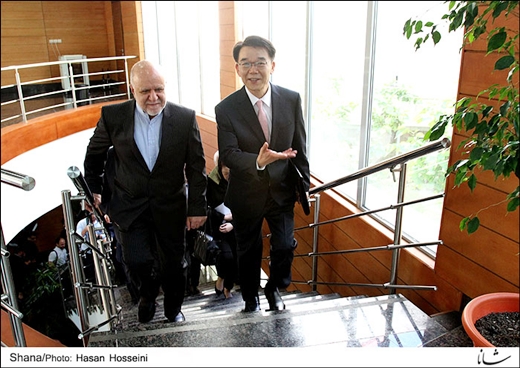 Addressing a meeting with Kang Hoin, South Korea’s minister of land, infrastructure and transport in Tehran, Zangeneh highlighted his meeting with the South Korean Minister of Trade, Industry and Energy Joo Hyung-hwan in his office in Tehran in February, saying that many Korean companies have initiated talks with Iranian energy companies and petroleum ministry subsidiaries since February.

Iran and Korea are to sign a cooperation MoU in which avenues of the two countries’ joint work has been considered.

Zangeneh expressed hope that the wishes of companies will be materialized by operational determination of both sides.

“Iran and South Korea can enjoy cooperation from oil recovery in Iran to investment of Korean companies in LNG and petrochemical industries,” said the official.

For his part, Kang Hoin said Korean companies are interested to join energy projects in Iran.

Iran and South Korea are to sign 4 memoranda of understanding on energy cooperation during the visit.

The two countries will sign a long-term oil and gas cooperation instrument in a ceremony held in the presence of their presidents along with Iranian Minister of Petroleum Bijan Zangeneh and his South Korean counterpart.

Park Geun-hye’s visit to Iran will be marked as the highest ranking visit to Tehran by a Korean delegation.