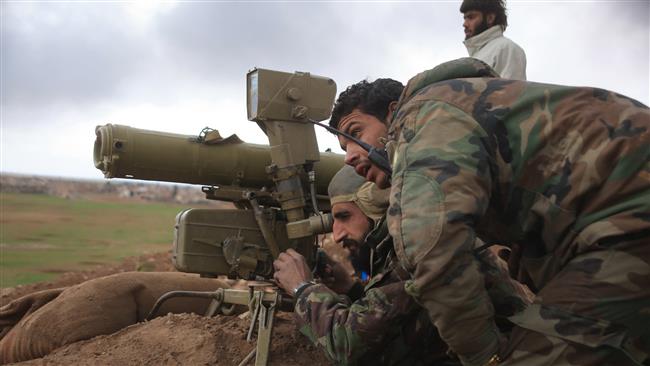 The Syrian army has reportedly managed to take full control of a strategic town in the southern province of Dara’a as they continue to gain ground in battles against foreign-sponsored Takfiri militants.

The so-called Syrian Observatory for Human Rights said Tuesday that Syrian forces liberated the key town of Sheikh Miskeen from militants, cutting off their routes between eastern and western Dara’a Province.

A day earlier, Syrian army sources said the army had taken control of more than 90 percent of Sheikh Miskeen.

The UK-based group said the clashes are now taking place outside the western parts of Sheikh Miskeen, which lies at a crossroads linking the provinces of Suwaida, Quneitra and Damascus to the southern part of the country.

The army, backed by airstrikes carried out by Russian and Syrian warplanes, launched the offensive against militants in the town late last month.

A security source told AFP that Sheikh Miskeen was a “launching pad” for militant operations, and one of the opposition’s “centers of gravity for the whole of Dera’a Province.”

Damascus has been fighting foreign-backed militant groups in the country since 2011.

Gains by the government have come at a speedier pace over the past months, especially since late September 2015, when Russia endorsed a request by Damascus to dispatch its warplanes over Syria for combat sorties against positions of Takfiri terrorists.

The observatory also said that at least 23 people, many of them militants, were killed in a bomb explosion in Syria’s Aleppo city on Monday.

The report said that 19 militants from the so-called Ahrar al-Sham terror group and four civilians were killed in the blast, which occurred in the Sukari district of the city.

The attack reportedly hit a checkpoint at the entrance to a security complex belonging to the militant group.

The report further said that several prisoners being held by the terrorist group at a facility in the complex were also believed to have been killed.

It also said the explosion destroyed three buildings, while people were missing under the rubble.

No group or individual has so far claimed responsibility for the attack.

In another incident on Monday, an Ahrar al-Sham commander and 11 members of his family were killed in a Russian airstrike on an area between northern Idlib and western Aleppo province, according to the report.