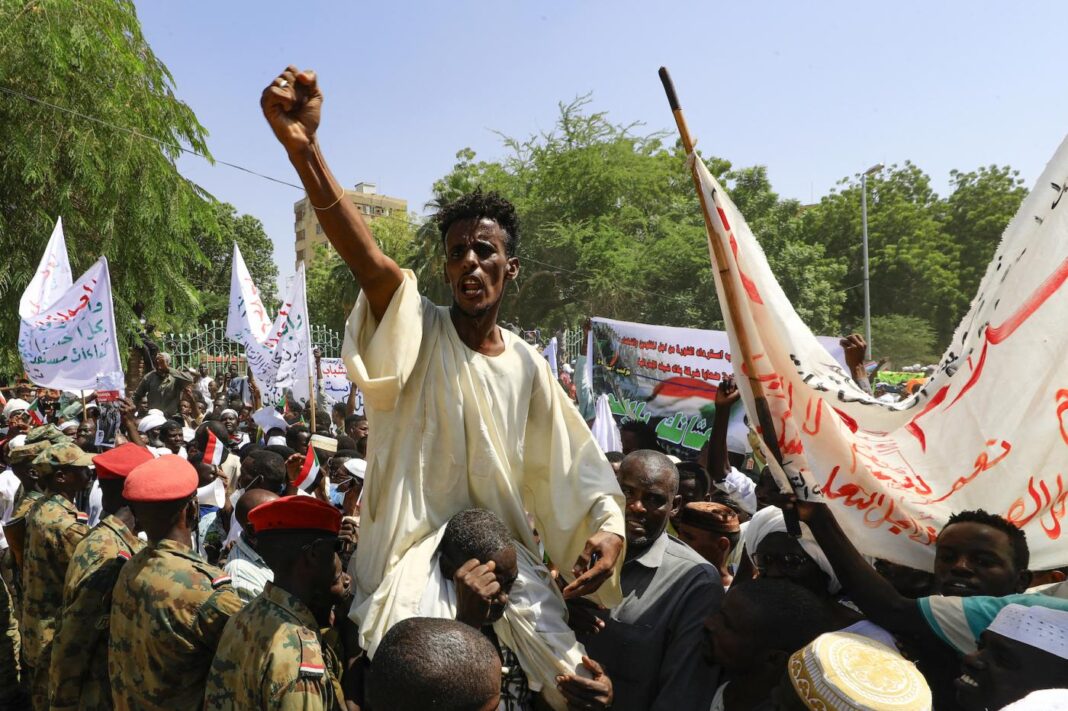 Thousands of people staged a mass rally on the streets of Sudan’s capital Khartoum on Saturday, demanding the dissolution of the transitional civilian-military government. The demonstrators urged the military to take power.

Sudan is grappling with the biggest political crisis in its two-year transition to civilian rule, following a massive demonstration on Saturday that brought thousands of pro-military protesters to central Khartoum, demanding the government to be dissolved.

The military and civilian groups have been sharing power in the east African country in an uneasy alliance since the toppling of long-standing President Omar al-Bashir, who was ousted by the army in April 2019 following weeks of mass protests.

Saturday’s protest was organised by a splinter faction of the Forces for Freedom and Change (FFC), a civilian alliance which spearheaded the anti-Bashir protests and became a key plank of the transition.

Outside the presidential palace, the protesters chanted: “We will stay put where we are… we want the dissolution of this government.”

Saturday’s protest comes after Prime Minister Abdalla Hamdok on Friday unveiled a road map to end what he described as the country’s “worst and most dangerous” political crisis in its two-year transition.

Groups advocating for civilian rule have called for protests on Thursday 21 October.

Support for the transitional government has waned in recent months in the face of its tough economic reforms, which have included the slashing of fuel subsidies and a managed float of the Sudanese pound.

Inflation has skyrocketed, reaching 422 percent in July, before easing slightly in August and September.

Hamdok, a former UN economist, has been facing calls to dissolve his government following the International Monetary Fund’s (IMF) approval of a $2.5bn loan and debt relief agreement that would see Sudan’s external debt reduced by some $50bn.

However the harsh reforms have hit the pockets of many Sudanese who are now struggling with poverty, shortages of medicines and power cuts.

On Saturday evening, demonstrators set up tents outside the presidential palace and chanted “one army, one people” and “the army will bring us bread”.

Abdelnaby Abdelelah, a protester from the eastern state of Kassala, told AFP that the government has overlooked other states beyond Khartoum.

“We want a government that knows about the things going on in the east,” he said.

“We are marching in a peaceful protest and we want a military government,” added Enaam Mohamed, a housewife.

The current government has failed to bring the people “justice and equality”, stated 50-year-old Abboud Ahmed, who wants the military to be in charge.

The IMF-mandated reforms so far have caused food and transportation costs to surge, forcing Sudanese people to make sacrifices.

Since September, demonstrators in eastern Sudan have blocked trade through the key hub of Port Sudan.

On 21 September, the government said it thwarted a coup attempt and placed the blame on sympathisers of the Bashir regime, which was dominated by Islamists and the military.

Since a coup attempt in September, Sudan’s military and civilian power-sharing partners have been locked in a war of words, with military leaders demanding the reform of the cabinet and ruling coalition. Civilian politicians accused the military of aiming for a power grab.

“The coup attempt opened the door for discord, and for all the hidden disputes and accusations from all sides, and in this way we are throwing the future of our country and people and revolution to the wind,” Hamdok noted in a speech on Friday.

“I am not neutral or a mediator in this conflict. My clear and firm position is complete alignment to the civilian democratic transition,” he added.

Nevertheless he said he had spoken to both sides, and presented them with a road map that called for the end of escalation and one-sided decision-making and a return to a functioning government.

He emphasised the importance of the formation of a transitional legislature, reform of the military, and the expansion of the base for political participation.

Referring to an ongoing blockade of the country’s main port in the East of the country by protesting tribesmen, Hamdok described their grievances as legitimate while asking that they re-open the flow of trade. He also said an international donors’ conference to benefit the region was being organised.

The mainstream faction of the FFC said, “The current crisis is not related to dissolution of the government or not”, adding, “It is engineered by some parties to overthrow the revolutionary forces… paving the way for the return of remnants of the previous regime.”

As tensions have risen, a number of international envoys have rushed to visit the country in order to ease the strains between the military and civilian leadership.

Earlier this month, a United Nations source disclosed that Volker Perthes, special representative of the UN Secretary General for Sudan, has been in Khartoum to undertake a series of meetings with civil and military officials in the transitional government.

However some Sudanese analysts have played down international involvement, saying the only way to protect the transition and democracy was through the people of Sudan who had made the revolution.