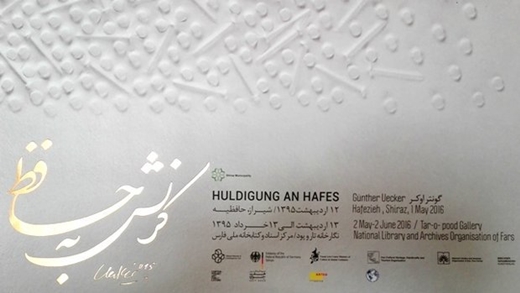 A collection of paintings by German sculptor and op artist Gunther Uecker, all inspired by ghazals of Persian poet Hafez, will be displayed in an exhibition in Shiraz opening on May 1.

Entitled “Tribute to Hafez” (“Huldigung an Hafes”), the collection will be unveiled at the mausoleum of Hafez, but it will later go on display in a month-long exhibit at Tar-o-Pood Gallery, the director of Iran’s Office for Visual Arts, Majid Mollanoruzi, said in a press conference on Thursday.

“The paintings inspired by ghazals of Hafez will be displayed in the exhibit to portray the two-year efforts of the artist on works by Hafez,” Mollanoruzi added.

He said that Uecker has donated the works to the Tehran Museum of Contemporary Art, but first, they will be showcased in Shiraz.

“The collection will later be shown in the Imam Ali (AS) Religious Arts Museum in Tehran for one month,” he asserted.

A number of Iranian and German officials are expected to attend the opening ceremony.

The 82-year-old Uecker is a member of the ZERO movement, best known for his signature use of nails arranged into tactile, sculptural paintings.

Uecker’s oeuvre includes paintings, art objects and installations as well as stage designs and films. He is mainly interested in the eastern European avant-garde of the 1920s and 1930s, but he is likewise fascinated by Asian cultures and their ideas.

His works can be seen in collections and at large fairs in both the West and the East. Uecker’s artistic creativity reached a climax in 2000 with the prayer room he designed for the rebuilt Reichstag building in Berlin.