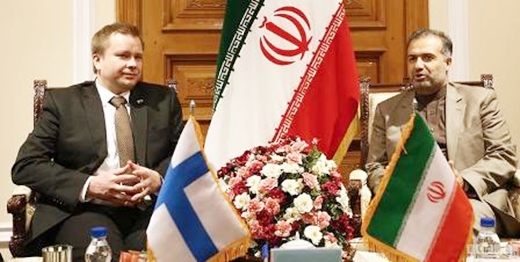 Western silence towards the murder of Yemeni civilians is not acceptable, the Head of Parliament's Research Center, Kazem Jalali, said on Sunday.

He made the remarks in a meeting with the Chairman of Finland’s Parliamentary Foreign Affairs Committee, Antti Kaikkonen.

“Saudi Arabia is committing big crimes against the innocent people of Yemen on a daily basis, and those in the West who pretend to advocate for human rights are silent about these developments,” the lawmaker added.

He criticized Western double standards towards human rights, and called for halt to the killing of innocent people in Yemen.

Jalali referred to the friendly relations of Iran and Finland, adding that the ground is ready for boosting the two countries’ relations in the post-nuclear deal era.

Terrorism will not be limited to the Middle East, the MP added. He called for cutting off financial and arms support for terrorists.

Kaikkonen, for his part, called for exchange of parliamentary delegations between the two countries, adding that the development of cultural ties between Iran and Finland can help the promotion of the political and economic relations.