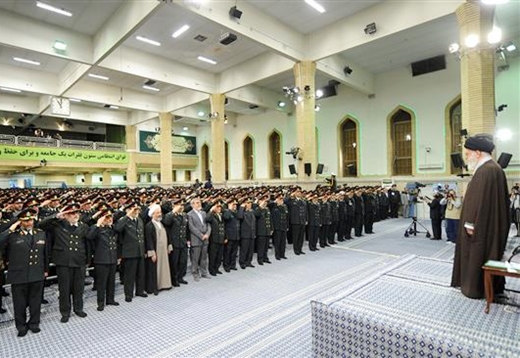 The Leader of the Islamic Revolution, Ayatollah Seyyed Ali Khamenei, says that the establishment of security is of foremost importance to the management of various affairs in society.

Ayatollah Khamenei made the remarks in a meeting with commanders and senior officials of the Iranian Police Force in Tehran on Sunday.

In the absence of security, important affairs of the country, including education, business, diplomacy, and management of the country would not be possible, he added.

He stressed that security is one of the main foundations for “practical steps and action” which is essential to the Implementation of the Economy of Resistance.

Addressing the Iranian nation in his annual message on the occasion of the Persian New Year on March 20, Ayatollah Khamenei chose the rubric “Economy of Resistance: Practical Steps and Action” as the motto of the year.

Ayatollah Khamenei lauded recent efforts made by the Iranian police to establish security in various fields, warning however, that further steps should be taken in this regard.

The Leader also advised the Iranian police to pay serious attention to establishment of moral security in the society, including by cracking down on miscreants, drug traffickers, and those people who do not show respect for social norms.