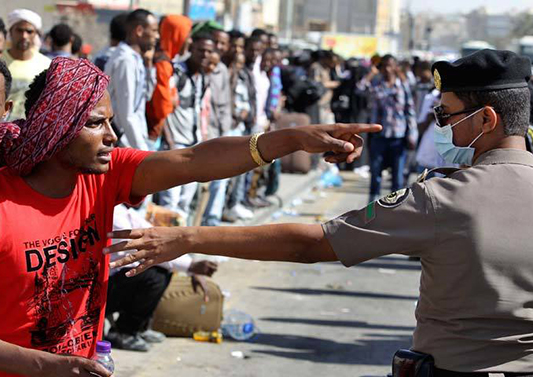 Political experts believe that Saudi Arabia’s plan to expel 5 million foreign residents is a policy to ease the regional crises Riyadh is faced with.

While US President Donald Trump’s new travel ban is still provoking reactions worldwide, Saudi Arabia’s Al-Hayat — a leading daily pan-Arab newspaper — has announced that Riyadh is likely to pass an anti-immigrant law to expatriate 5 million foreign residents.
Trump signed an executive order on March 6 blocking citizens of six predominantly Muslim countries, including Iran, Somalia, Sudan, Yemen, Syria and Libya, from entering the US.
According to a report by IFP, the Consultative Assembly of Saudi Arabia, in its upcoming meeting, will discuss the plan to battle immigration [to Saudi Arabia] with the intention of acquiring illegal citizenship and the possibility of setting up a committee in the Interior Ministry to banish 5 million immigrants, who, as alleged by the Saudi officials, are residing illegally in the country.
Although the drafters of the bill say their anti-immigrant law seeks to prevent the entry of those immigrants to Saudi Arabia who intend to reside illegally and permanently in the country, some analysts hold that the move is made in response to the recent regional security and military developments and to address the crisis caused by Saudi Arabia’s military intervention in Yemen.
These experts maintain that the Saudi move is a strategy to force a major part of the immigrants [currently living in the country] to cooperate with Saudi Arabia in Yemen war and its other intra-regional interventions, vivid examples of which were witnessed during the US invasions of Iraq and Afghanistan in which the White House dispatched and deployed a large number of the immigrants [residing in the country] to and in the Iraqi and Afghan territories.
Among the other factors contributing to the Saudi government’s adoption of the policy is the increasing tensions between Saudi Arabia and Pakistan caused by the latter’s reluctance to aid Riyadh in its regional warmongering.
A while ago, Al Akhbar newspaper – a daily Arabic language newspaper published in a semi-tabloid format in Beirut – listed a number of the signs indicating that the relations between Saudi Arabia and Pakistan are worsening: First, the reluctance of the retired Pakistani army chief General, Raheel Sharif, to agree to Saudi Arabia’s request demanding him to be the supreme commander of the Saudi-led “Islamic military alliance”, also known as Muslim NATO, created by Riyadh in 2015, saying he will only accept the position on the condition of including Iran in the Islamic military alliance; Second, an 8.5-percent drop in the value of the monetary transactions conducted by Pakistani residents of the Saudi Arabia, and third, the arrest of 15 Pakistanis by Saudi Arabia on terrorism charges.
Thus, Riyadh’s threats of exiling the immigrants, a large number of which are Pakistanis, from the country can be perceived as the Saudi government’s response to Islamabad’s non-cooperation.