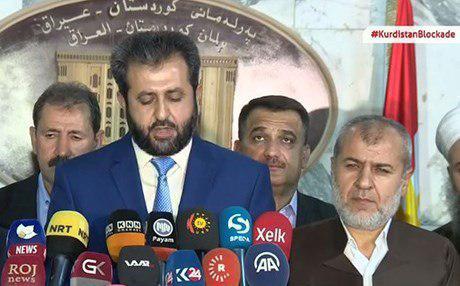 The internal division in Iraqi Kurdistan region has entered a new phase with the resignation of the Kurdistan parliament’s secretary.

Just five day after the independence referendum of Iraqi Kurdistan, the Kurdish Parliament’s secretary, Fakhradin Qadir from the Change Movement, announced his resignation in protest at what he called the Kurdistan government’s manipulation and instrumental use of parliament.

Qadir tendered his resignation as Secretary and membership of Kurdistan’s Parliament in a press conference on Sunday outside the parliament building, a Farsi report by the Kurd Press said.

“During my membership in the parliament, we adopted significant laws and decisions which, unfortunately, have never been implemented by the government. Meanwhile, the ruling party has limited the authority of the parliament. Political parties are after an acquiescent parliament and that’s why they are seeking to limit the scope of parliament’s activities,” he said.

Qadir went on saying Kurdistan region needed a written Constitution but “the parliament members failed in a vain attempt to develop a constitution because of government’s sabotage campaign.”

The Kurdish politician added the parliament tried to establish a fund for oil revenues to make oil dealings more transparent but “this goal was never achieved and we saw tens of illegal contracts signed without coming under the lawmakers’ supervision.”

Qadir also referred to the recent independence referendum of Iraqi Kurdistan region and said, “The parliament members did their best to hold the referendum within the law but the vote which is of national significance for us was held without the lawmakers’ supervision.”

He then touched on the main issue of the leadership of Kurdistan and its subsequent political crises and said the last parliament abandoned the issue unresolved “but when we began working to find an appropriate mechanism to resolve the issue, we faced complete crackdown and the parliament was sealed.”

The tensions between the government and parliament in Iraqi Kurdistan’s region began to gain momentum back in 2015 when the Change Movement, the second largest party in the Kurdistan Regional Government (KRG), said its parliament speaker and several parliamentarians had been prevented from entering the Kurdish capital, Erbil.

The checkpoint was manned by security forces affiliated with the Kurdistan Democratic Party (KDP).

The KDP is the largest bloc within the KRG and is led by Masoud Barzani, who has held onto the region’s presidency, even though his rivals, including the Change, claim his term ended on August 19 in 2015.

Relations between Change and KDP deteriorated after Change and Speaker Sadiq played a major role in failed attempts to amend the presidential law to limit the powers of Barzani and set clear term limits for him.