A Saudi prince has been derided by social media users after claiming that Riyadh is capable of destroying Iran in a matter of hours.

Abdullah bin Sultan Nasser Al Saud posted a video on Twitter page which he says belongs to two years ago and shows an expert talking on a Saudi TV channel about Saudi Arabia’s military equipment.

At the end of the video, it is claimed that Riyadh can destroy Iran only in eight hours.

On his Twitter page, the prince echoed the so-called expert’s opinion and wrote “Saudi Arabia can destroy Iran in eight hours.”

He added the video clip belongs to two years ago, i.e., before Riyadh bought modern military hardware and before it upgraded its military systems. The prince claimed there is no power in the world which can stand up to Riyadh’s “unity and strength.”

The prince’s claim received widespread reaction from Twitter users many of whom ridiculed his comments. 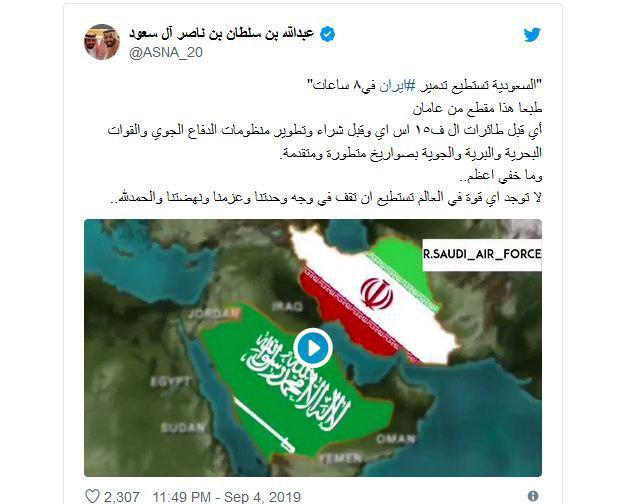 Many of the users referred to the Saudi war on Yemen which has taken almost five years during which Riyadh has failed to achieve its objectives.

This is while Saudi Arabia had claimed at the beginning of the war that it would win the war in a matter of weeks.