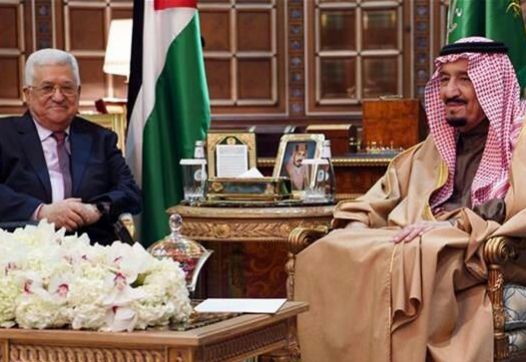 The Arabic-language website Al Youm revealed that during his latest visit with Abbas in Riyadh, King Salman has urged him to put pressure on Hamas as part of Saudi Arabia’s policies to normalize ties with the Zionist regime of Israel.

According to Al Youm, King Salman said his country will pay part of the Palestinian Authority’s monthly salary only if Abbas pressurizes Hamas into distancing itself from Iran and Lebanon’s Hezbollah movement.

The Palestinian website quoted Abbas as saying during the meeting that Riyadh should urge Cairo to pressurize Hamas into remaining committed to a long–term truce with Israel.

Meanwhile, a report by the trans-regional paper Rai Al Youm said Saudi Arabia has put pressure on Abbas to accept either “a big deal -dubbed as the largest deal of the century- reached with US President, Donald Trump, on creating peace in the Middle East or resign.”

About one week before Abbas’ visit to Riyadh, a senior advisor to Trump who is also his son-in-low, Jared Kushner, and US president’s Special Envoy in the Middle East, Jason Grinblatt, made a secret visit to Riyadh and held talks with Saudi officials.

According to Rai Al Youm, security coordination between Palestinian Authority with the Zionist regime which has been restored following the visit of Abbas to Riyadh on the one hand and the pressures put on the Palestinian Authority to accept the deal aimed at restoring ties between Israel and the Arab states on the other hand, have put the Issue of Palestine at a critical condition.

Rai Al Youm wrote Riyadh is seeking to use Abbas as leverage against Iran and Hezbollah, adding what motivates Saudi Arabia to increase cooperation with Abbas is that earlier Abbas announced he would not allow another Hezbollah to grow in the Gaza Strip.

“The Saudis maintain that Mahmoud Abbas can turn into a good ally because his main enemy, (Hamas) in the Gaza Strip has established good ties with the Islamic Republic of Iran and a number of Hamas delegations have paid a visit to Tehran over the past month,” the paper concluded.