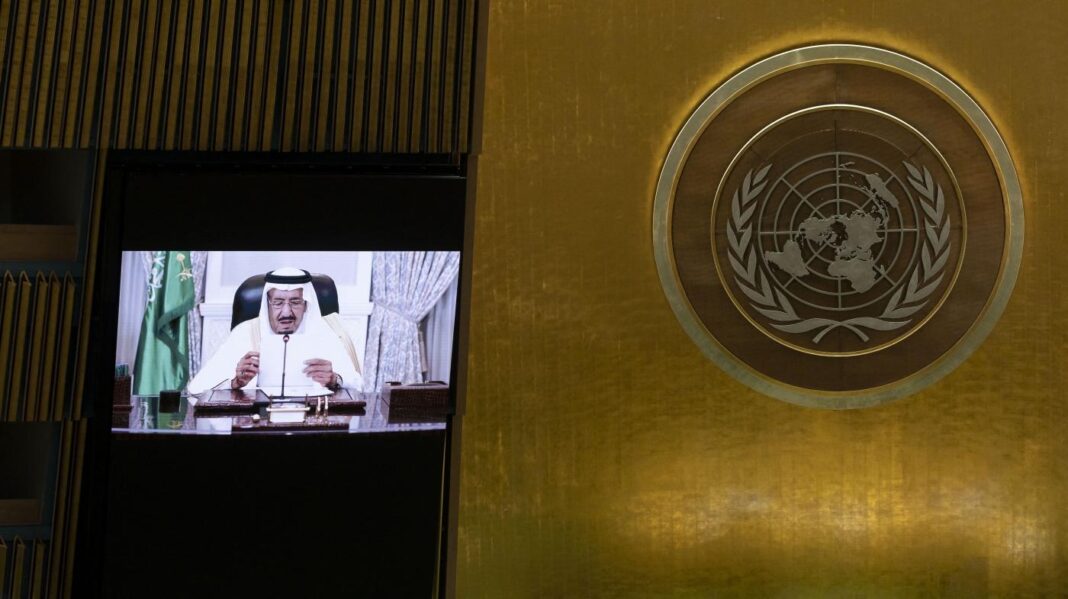 In a pre-recorded message to the United Nations General Assembly on Wednesday, King Salman also said he supported efforts to prevent Iran from obtaining nuclear weapons and expressed concern about Iran’s destabilizing use of regional proxies.

“We support international efforts aiming at preventing Iran from having nuclear weapons,” he stated, adding, “We are very concerned about Iranian steps that go counter to its commitments as well as daily declarations from Iran that its nuclear programme is peaceful.”

Iran and Saudi Arabia have cut diplomatic ties in 2016, but have recently been holding talks in Iraq aimed at reducing tensions.

“Iran is a neighboring country, and we hope that our initial talks with it will lead to concrete results to build confidence… based on respect of sovereignty and non-interference in internal affairs,” the king continued.

Since intervening in Yemen’s war in 2015 to prop up the government of President Abd-Rabbu Mansour Hadi, rights groups say the Saudi-led coalition has repeatedly targeted non-military sites – including schools, factories and hospitals. At the same time, Houthi rebels have claimed responsibility for ballistic missile and drone attacks that have struck deep into Saudi Arabia and targeted civilian infrastructure.

“The kingdom maintains its legitimate right to defend itself… the peace initiative in Yemen tabled by the kingdom last march ought to end the bloodshed and conflict,” the Saudi king said.

“Unfortunately, the terrorist Houthi militias reject peaceful solutions. They have placed their bets on a military option,” he added.

In his address, King Salman reiterated his commitment to the creation of a Palestinian state with East Jerusalem as its capital.

“Peace is the strategic choice of the Middle East region which goes through a just, durable solution to the question of Palestine,” he noted.

Although he has long been considered a supporter of the Palestinian cause, analysts suggest his young son and the country’s de-facto ruler – Crown Prince Mohammed bin Salman – may be open to normalizing relations with Israel.