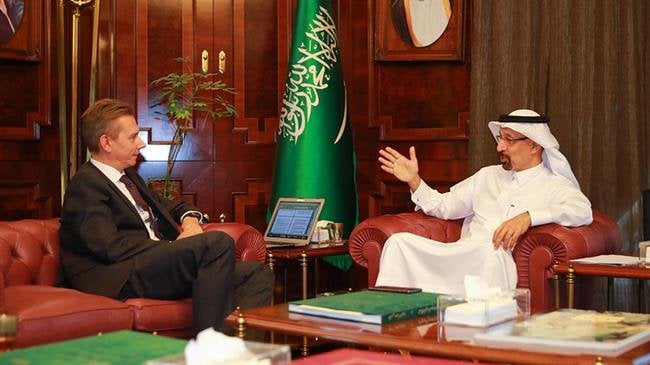 Saudi energy minister says his country would not be able to compensate for possible oil disappearance from global markets once the US re-imposes its sanctions against Iran.

Speaking in a Monday interview with Russian news agency TASS, Khalid al-Falih said Saudi Arabia will have to use its oil reserves if it wants to cover 3 million barrels per day of oil loss from Iran.

However, he added, there is no guarantee that oil prices would not go higher once anti-Iran sanctions come into force in early November.

Al-Falih’s remarks flatly contradicted those by Saudi Crown Prince Mohammed bin Salman, who claimed earlier this month that his country has “already replaced” Iranian crude lost to the US sanctions.

“As I have repeatedly said there is no replacement for Iranian oil in the market. Saudi Arabia and Russia’s output is near their highest level ever and they have no spare capacity to pump more to replace Iran’s oil,” he told SHANA. “The market’s knowledge of this inability has raised the prices as the average price (of crude) … oil prices had slowed down the economic growth of most of the consumer countries, which is affecting the global economy.”

Iran, the third-largest producer of the Organization of Petroleum Exporting Countries (OPEC), has blamed US President Donald Trump for oil price hikes, but the US president has pointed the finger at OPEC and called on the oil-producing body to boost output.

The US president wants the Saudis to raise their oil output to prevent prices from spiking ahead of midterm elections on November 6, potentially undermining the kingdom’s place among two dozen oil-producing nations which may think Riyadh is doing Washington’s bidding at their expense.

“The United States imposes its own conditions on the oil market. They actually stick a needle in their body and then say ‘ouch’, asking others to fix their problems,” the Iranian oil minister said last Tuesday. “One has to tell them, ‘You don’t need to stick needles in yourselves.’ Remove sanctions and let prices settle down and the market move out of imbalance.”