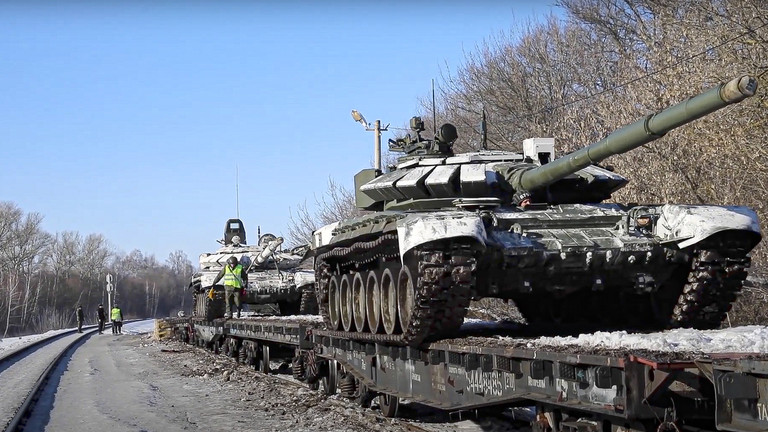 The units of the tank army of Russia’s Western Military District (WMD) are returning to the site of permanent deployment after conducting planned exercises, according to the Ministry of Defense.

“The military echelon with the equipment of the units of the WMD tank army went to the point of permanent deployment after the completion of the planned exercises,” the ministry said in a statement on Thursday.

The transportation of tanks and armoured tracked vehicles is carried out by rail over a distance of about 1,000 kilometres (621 miles), the statement read.

No details were given as to the location of the drills or their place of permanent deployment.

Russia has carried out drills involving nearly all military districts to conduct operational training of troops. Forces of the Southern Military District have also begun preparations to return to the site of permanent deployment, the ministry noted.

On Thursday, heavy fire and explosions have been reported on the contact line in Ukraine’s war-torn Donbass region, with Kiev’s forces and those loyal to the two breakaway self-declared republics accusing each other of aggression hours after the Kremlin warned fresh fighting could be on the cards.

Russian Presidential Spokesman Dmitry Peskov told reporters on Thursday Moscow is keeping a close eye on the situation in southeastern Ukraine and its actions will depend on future developments.

“We are keeping a close eye [on the situation]. We’ll see how the situation will unfold,” he said, when asked if the Kremlin planned to take any action.

“However, it is a source of deep concern,” the Kremlin spokesman added.

According to Peskov, Russia expects that its “opponents in Western capitals” will use their influence to warn the Kiev authorities against escalating tensions further.

“We have repeatedly warned that Ukraine’s excessive military buildup in close proximity to the line of contact, along with possible provocations, could pose a great danger. We can see that provocations are taking place. We have seen reports from the self-proclaimed republics about an exchange of strikes on the line of contact and the first strikes came from Ukraine. This is very alarming information,” Peskov stressed.

“We hope that our opponents in Western capitals, in the US and NATO countries, will use their influence to warn Kiev against escalating tensions further,” he added.

The situation at the border between Russia and Ukraine is stable while tension is growing at the Donbass line of contact, he noted.

The Russian presidential spokesman thus commented on the Ukrainian military’s claims that the situation in Donbass was stable.

“The situation at the Russia-Ukraine border is, indeed, stable,” the Kremlin press secretary said.

“Incidentally, we have repeatedly heard statements by the Ukrainian military that they do not see any extraordinary potential from Russian territory, which are in stark contrast with the claims of other countries that always refer to their intelligence data unconfirmed by the Ukrainians themselves,” Peskov added.

However, as for the line of contact with the territories of the self-proclaimed Donetsk and Lugansk People’s Republics, “we see that tension is growing there,” the Kremlin spokesman emphasized.

As the Russian presidential spokesman pointed out, the situation in Ukraine may go beyond the scope of information attacks and explode at any moment.

“Each moment risks going beyond the scope of information attacks and bringing about consequences that will rekindle the war in close proximity to our borders,” the Kremlin spokesman cautioned.

The Kremlin is not ready to and will not consider complaints, including from the US, on how Russia deploys its armed forces on its own soil, Peskov told journalists.

“First of all, we are not ready to and we won’t consider complaints with regards to how we move the armed forces on the territory of our country. This is our sovereign right and we don’t intend to discuss it with anyone,” the Kremlin official said in response to a request to comment on information that Russia allegedly continues to send its troops to the border with Ukraine.

He reiterated that earlier, Russian Defense Minister Sergey Shoigu reported to Russian President Vladimir Putin that “certain phases of drills in regions adjacent to the border with Ukraine, in Crimea, are nearing completion.”

Putin’s press secretary explained that as those phases of the exercise are being completed, the units begin to return to their permanent military bases and this process had already started.

“This is a prolonged process. It is clear that the contingent for the drills, for the exercise was formed over many weeks, and, of course, it is impossible to withdraw it in one day. They cannot simply go up in the air and fly away all at once,” the spokesman said, reiterating that this process takes time and the Defense Ministry has a precise schedule for returning the units to their bases.

“So, in this case, these are, as always, absolutely groundless accusations,” the spokesman concluded.