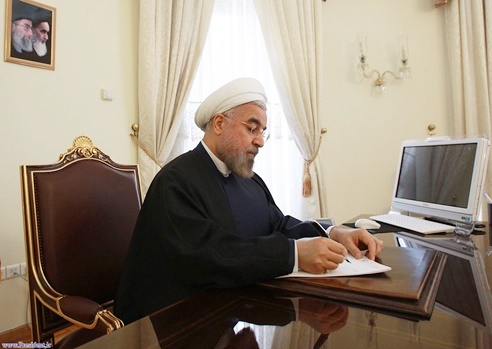 Within the past few weeks, a number of paycheques belonging to senior executives have been leaked, revealing their astronomical salaries. The figures provoked uproar among Iranian media and public opinion, and finally drew President Hassan Rouhani's reaction.

On Sunday, June 12, President Rouhani ordered First Vice-President Eshaq Jahangiri to seriously pursue the issue of extremely large salaries given to certain executives, urging him to fire the ones who had violated the law as soon as possible.

He also asked Jahangiri to provide a report on the “decisive measures” taken in this regard, and to submit it to the President.

“All cases of violation and abuse should be identified as soon as possible; the wages unlawfully paid should be returned to the public funds; the offending managers should be dismissed; and a report on the decisive measures [taken in this regard] should be given to me,” Rouhani said in his order, as reported by Alef and translated by IFP.

Rouhani’s move came in reaction to a recent leaked paycheque belonging to the managing director of the state-run Bank Refah, which showed an astronomical monthly payment of $67,000.

That was the worst case in the past few months. Earlier in May, Central Insurance of Iran (CII) came under fire when the paycheque of one of its employees appeared on the popular messaging app Telegram, as reported by Al Monitor.

The name of the employee was crossed out but likely belonged to one of the five members of the CII executive team. Subsequently, more paycheques were leaked, displaying what appeared to be monthly salaries in the tens of thousands of dollars, interest-free loans and significant overtime payments.

The CII responded by releasing two paycheques belonging to one of the executives, showing a base monthly salary of IRR85m ($2,450). It argued that the large sum leaked was in fact not a salary, but 84 months of back payment owed to the employee in question. This did not help quell the anger directed at the CII and the government.

A conservative website later claimed to be in possession of a scathing letter written by CII employees addressed to President Hassan Rouhani. The unnamed staff blasted their CEO, Mohammad Ebrahim Amin, a long-time insurance executive, criticizing him for showing favouritism during his tenure and increasing executive pay “astronomically.” The outcry subsequently led to the resignation of Amin, who began his resignation letter with the words “I am ashamed.” He did not admit to any wrongdoing, but he apologized to the Minister of Economic Affairs and Finance for making his ministry look incompetent. Minister Ali Tayyebnia accepted Amin’s resignation and quickly reinstated the former managing director, Abdulnasser Hemmati. However, as pointed out by numerous commentators, the removal hardly addressed the root of a more widespread phenomenon.

As per Article 76 of the Civil Service Law, which the Rouhani administration renewed, “No individual in a government post can be paid more than seven times the lowest earning civil servant.” Most estimates put this minimum almost at IRR1m ($290) per month.