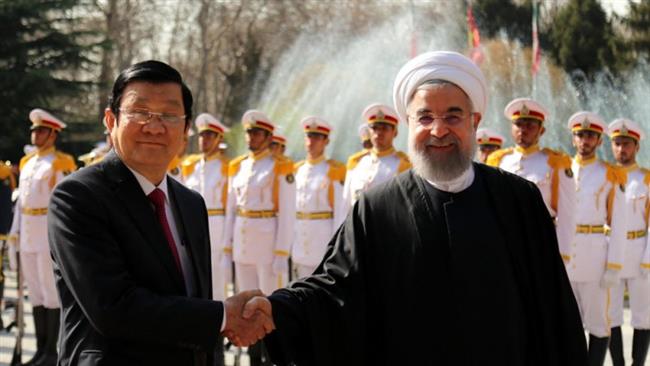 Iran’s President Hassan Rouhani has extended an official welcome to his Vietnamese counterpart Truong Tan Sang, who is in Tehran for bilateral talks.

During the ceremony on Monday, national anthems of the two countries were played and the two presidents reviewed the guard of honor.

Rouhani and Tan Sang are holding a bilateral meeting.

The Vietnamese president arrived in Tehran on Sunday for an official three-day visit at the invitation of his Iranian counterpart.

Heading a politico-economic delegation, Tan Sang is scheduled to discuss ways with Iranian officials to expand bilateral ties between Tehran and Hanoi particularly in the fields of economy, banking, and energy.

Vietnam and Iran established relations in 1973 and since then the two countries have increased political and economic cooperation through exchange of visits by senior officials from both sides.

Iran opened an embassy in Hanoi in 1991 and Vietnam opened its embassy in Tehran in 1997.