Rouhani: Iran a Land of Brotherhood and Unity among Ethnic Groups 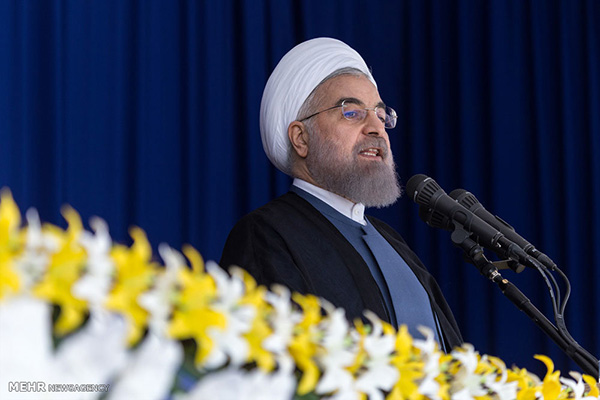 Iranian President Rouhani said Iranians from all religions, sects and races are branches of one tree, called Islamic Iran.

Speaking to the people of West Azerbaijan Province during his 28th provincial visit on Monday May 30, Rouhani noted that his government’s priority is economic growth and youth employment. He underlined that efforts have been made to pave the way for prosperity and development for the youth.

The President stressed the need for unity and consistency among the people with any religion, race, language, or sect.

Rouhani said that security and stability are well-established across the country, while the surrounding region is engulfed in insecurity, division, extremism, nepotism and sectarianism.

“Iran is the land of brotherhood and unity among all ethnic groups,” Rouhani stressed.

West Azerbaijan province has a 967km border with neighbouring countries, including Turkey, Iraq, and Azerbaijan Republic, and is the main terminal for Iranian exports to the countries in the region, he added.

Rouhani underlined that his government regards economic prosperity highly. “Here we will do what is necessary to encourage agricultural exports; the National Development Fund will allocate $33m with 10% interest for the province’s exports.”

The region enjoys 1m hectares of arable land with lots of rainfall, Rouhani underlined, and has great potential for exporting agricultural crops to regional countries.

“Agricultural projects will create 12,000 direct jobs and thousands more in indirect employment,” Rouhani said, adding the projects will account for a 200,000-ton increase in crops.

“I promised during the presidential election campaign that my government will start working to save Lake Urmia on the first day,” Rouhani addressed the people.

“I’ve been faithful to my promise; now Urmia Lake has seen a 10cm increase in water level, thanks to the projects which have been implemented and [government] efforts, as well as with people’s help.”

Officials have said if the current restoration efforts had not been effective, the lake would have turned into a swamp within four years.