Romances of a Photographer 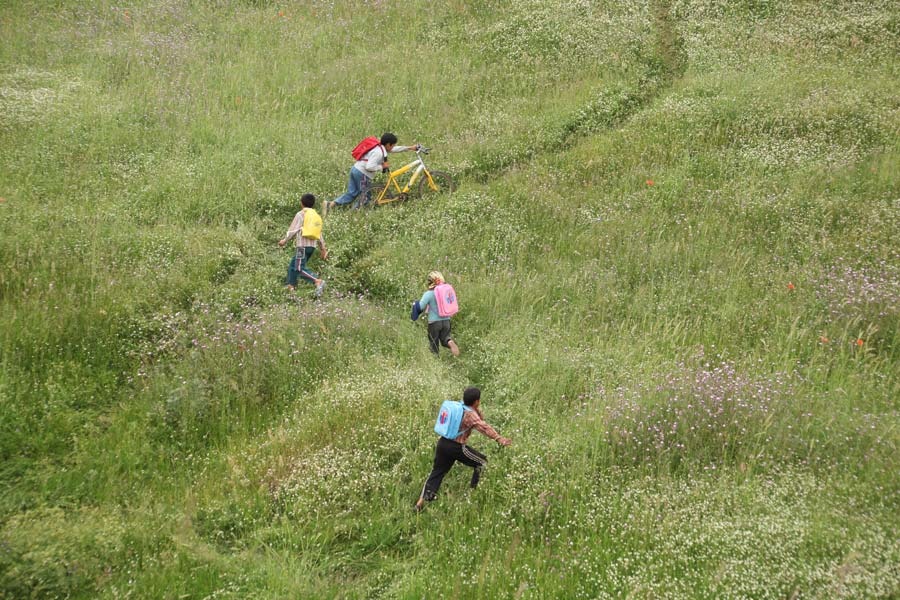 Each one of his photos portrays a dazzling, colourful canvas of nature with people who each carry a thousand stories. Stories of love, suffering, work and life in the heart of the mountains in the north of Iran.

His artistic name is Shabab, meaning youth and adolescence. He’s the most famous photo-narrator of schools and students. He says, “I went to a single school 15 times just to photograph a third grade student.”

The following is a summary of KhabarOnline interview with Mohammad Golchin, which is translated by IFP.

According to KhabarOnline, quoted from Jame Yavari Farhangi quarterly magazine, Mohammad Golchin, working under the name of Shabab, has been a photographer for about twenty years, but he has been focused on the world of schools, books and backpacks for seven years. This has led to the creation of respected photographs that have been displayed and entered into many renowned international festivals such as Asahi Shimbun in Japan. All this has led him to be called the best photo-narrator of the most unusual schools in Iran.

He says, “I photographed schools and children to make people grateful if they are students in comfortable situations. The children of my photographs walk through rivers, climb rough rocks and run in mud and rain to get to where they call school, so maybe they can learn a few things.” In Shabab Golchin’s photographs, life can be seen, as well as suffering and difficulty. Through his lens, however, life seems more powerful than anything else. This is perhaps the secret of the durability of his photos.

We had no other option than a telephone interview with him. He is from Talesh, a city in Gilan province at the edge of the Caspian Sea. He still lives in the same region, in the same city where he became a famous photographer, with over 100 internationally selected photos.

Read Shabab’s own narrative of his photographic world, including international festivals and events.

“The children of my photographs walk through rivers, climb rough rocks and run in mud and rain to get to where school”

I got the chance to read more after I was accepted for university in 1995. It was then when I learnt about a photography magazine called Aks. It was a very popular magazine and many photographers would share their experiences with the readers in it. After reading it once, I was very interested, so I found all its old issues. It was not a long time after that that I realized I was in love with photography. By reading the same materials, I started to learn photography through experiment. It’s interesting that I continued the same experimental method by reading about it, and by looking at more photos. Today, I own a photo gallery myself and have trained many students.

What were the subject of your photography in those days?

In the beginning, all my photographs were based on the beautiful nature of Gilan province and Talesh. I studied forestry in Gilan University, so it was always extremely pleasant to travel in the heart of Talesh Mountains. I was trying to portray that feeling at first, but after a while I felt like I needed newer and more meaningful spaces. One day when I was in a mountain region for photography, I passed by a school. The children were studying in a very bad condition with the least of facilities. The teacher welcomed me to the school after he realized how much I was interested by it. I was so intrigued that I went to the Ministry of Education to get the required permissions. There were photos of many other schools like the one I saw on the wall of the hall where I had to wait. All those photos made me very confident that I wanted to photograph schools. It’s now seven years that I’ve been involved in it.

Did your photos of that school get seen or admired anywhere?

Yes, and it had very good consequences. The most important one was the budget increasing for repairing and building new schools in those regions.

What is the most memorable photo that you have ever captured? 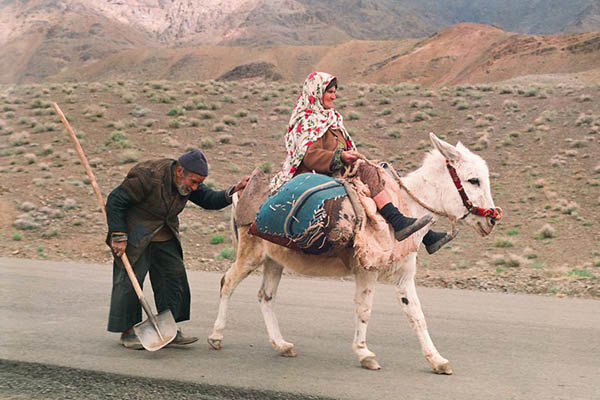 The photo called “Love”. It became famous and received a UNESCO award as well. It’s a photo of an old couple moving through the forest with their donkey. The old woman is sitting on the donkey while her husband is escorting her with a hunched back, holding a spade in one hand and holding the animal’s back with the other one, as if he’s looking after his wife. I took it on one of my trips to Abyaneh [a village near Kashan, with significant architecture and one of the tourist destinations of Iran’s central desert]. In fact, it was taken 20 years ago.

“The most important outcome was the budget increasing for repairing and building new schools in those regions.”

Is there anyone in your photos who you would be an unforgettable hero?

Yes. A boy called Ismail. He’s in the third grade. I went to his school 15 times just to photograph him. I’m not sure what it is about him that I’m so amazed by.

What are the awards that you have received in all these years?

My school collection was selected as the best documentary collection among 19,000 other collections from 155 countries in the world in UNESCO’s Humanity Photo Awards (HPA) in Shangri-la, China.

“I went to his school 15times just to photograph him. I’m not sure what it is about him that I’m so amazed by it.”

Is photographing schools a permanent project, or have you considered a limit for it?

I think there’s not a long way to wrap up the school photographing project. I have a few thousand photos on this subject which I think is enough, and I’ve done what I had to. Anyway, the “Road to School” project is coming to an end, and I should start focusing on other projects as well.