Rezaei: Saudi Arabia should be Fearful of Iranian Silence 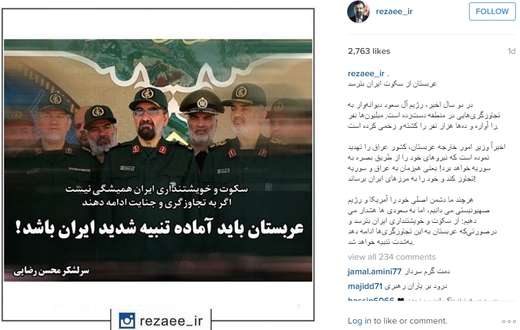 The Secretary of the Expediency Council, referring to provocations and aggressive acts committed by the Saudis in recent years, warns that Iran’s self-restraint will not last forever.

According to Khabar Online, Dr. Mohsen Rezaei has given a warning to the Saudis in the form of a note on his Instagram page.

In his note, he wrote that over the past two years, Saudi rulers have recklessly launched campaigns in the Middle East region. These have killed tens of thousands of people, and made millions homeless, he claimed

The Saudi Foreign Minister recently said that he intends to send Saudi troops to Syria through the Iraqi port city of Basra, which would mean invading both Iraq and Syria, as well as coming close to the Iranian borders, Dr. Rezaei contended.

He gave his opinion that although the United States and Israel are considered enemies, the Saudis should also be afraid of Iran’s silence and patience. Saudi Arabia should know that in case of continued aggression, it will face severe punishment, the Secretary warned.